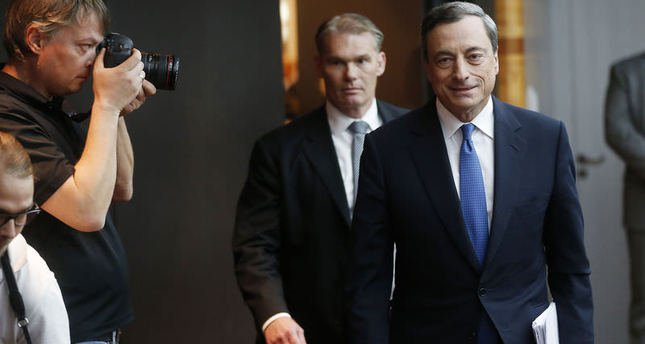 by Associated Press
Nov 06, 2014 12:00 am
European Central Bank head Mario Draghi opened the door for further stimulus on Thursday, saying the bank staff is preparing the technical groundwork for further support measures if needed for the struggling economy. Stocks rallied and the euro slumped on the news.

The ECB did not announce further monetary support after its governing council meeting Thursday, at which it left its key interest rate at a record low of 0.05 percent.

But Draghi's comments on the preparations for more measures sent markets soaring and weighed on the euro. Central bank stimulus measures can weigh on a currency.

The euro fell to $1.2394 from $1.2520 before Draghi started speaking. It is the first time it has traded below $1.24 since August 2012, when Draghi famously promised to do "Whatever it takes" to save the euro. Stock markets rallied, with Germany's DAX up 1.6 percent.

Draghi has said the ECB could engage in further unconventional measures, such as large-scale bond purchases to pump newly created money into the economy, if the economic situation worsens.

But the ECB has held off, in part because of skepticism about the measure in Germany, the eurozone's largest and most influential member.

The ECB also wants to give an opportunity to measures it is already deploying to have an effect. The ECB has slashed its benchmark interest rate, offered cheap loans to banks, and started purchasing bonds backed by bank loans. All are steps aimed at easing credit to companies.