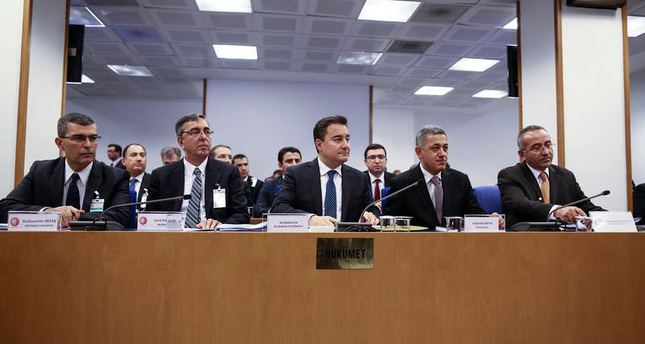 Stating that there have been important increases in welfare indicators, the Deputy Prime Minister Ali Babacan also announced that there won't be an increase in the prices of natural gas and electricity until the summer of 2015. Underlining the fact that it is not easy to calculate the distribution of wealth and the final total, Babacan said that the Treasury provided $11 billion worth of guarantee during the second quarter of this year and moreover, $2.3 billion of liability has been undertaken for the Eurosia Tunnel, Gebze-Orhangazi, Northern Marmara Highway and the 3rd Istanbul Bridge.

According to Babacan's statement, the consumer loans have increased by 8-9 percent this year, while the increase in loans provided to small and medium0sized enterprises (SMEs) was 25 percent. "We used to watch credit card ads on TV but now banks' ads show more SME loans," said Babacan.

According to IMF parameters, the national income, which was around $10,324 in 2002, increased to $18,874 last year - increasing from $3,522 to $10,721 when market exchange rates are considered. Turkey, which was included in the lowest ranks of middle income countries in 2002 has now risen to the higher ranks of middle income countries. The government's structural transformation program will enable growth rates to reach 4 to 5 percent and savings are expected to increase to 14.9 percent. Employment capacity increased by 5 million over the last five years expanding by 1.28 million within the last year alone.

The foreign exchange reserves of the Turkish central bank including gold are $132.2 billion and its assets at the Unemployment Insurance Fund are around $70 billion; of which $60 billion will be deposited in government debt securities.

The number of participants to individual pension system is expected to exceed 5 million by the end of the year and in the first nine months of the year, the state has paid contributions equal to $1 billion with $193 million for the contributions paid by the participants. Turkey has also increased its share in development aid providing $3.3 billion last year. The development aid provided by the Treasury has increased to $678 million.

Low-interest loans have been granted to 590,000 producers this year with TL 19.5 billion ($8.62 billion) and TL 1.5 billion issued by Ziraat Bank and the Agricultural Credit Cooperative respectively.

Halk Bank also issued TL 12 billion in subsidized loans to more than 124,000 tradesmen with interest rates ranging around 4-5 percent. Furthermore, the Credit Guarantee Fund continued supporting the real economy with 6,355 companies, gaining access to financing within the last five years and providing surety for loans equaling TL 3.8 billion. The foreign investments and resources provided to projects including the Natural Gas Sector Development Project, Marmaray, Renewable Energy Integration Project and various others undertaken in various sectors has reached $2.3 billion. Financing is expected to reach $4.1 billion. Turkey's power within the IMF has also increased and while Turkey's resource relation with the IMF has ended, Turkey is being represented for the first time by an Executive Director in the IMF's management; which will also increase the voting share of Turkey from 0.61 to 0.95 percent. As a result, Turkey will become one of the 20 strongest members of the IMF.

Babacan, said that a rise in natural gas or electric prices is not foreseen until the summer of 2015. Stating that the 9 percent increase does not cover Turkish gas distribution company BOTAŞ's losses, Babacan said that a revision of gas prices can be made in 2015, considering the downward trend in oil prices in the last two months. Emphasizing the need for structural reforms in the Turkish economy to increase the pace of growth, Babacan said that the recently unveiled 10th development plan, covers 25 transformation programs. The plan is focused on structural reforms that aim to increase productivity, reach higher technologies and achieve a sustainable and solid fiscal structure. "Turkey has pressured G20 countries to implement more economic reforms to achieve global economic growth," Babacan said, and added that Turkey will follow the structural reforms in G20 countries closely, as this term's president.