PM: Turkey will be steering world economy with G20 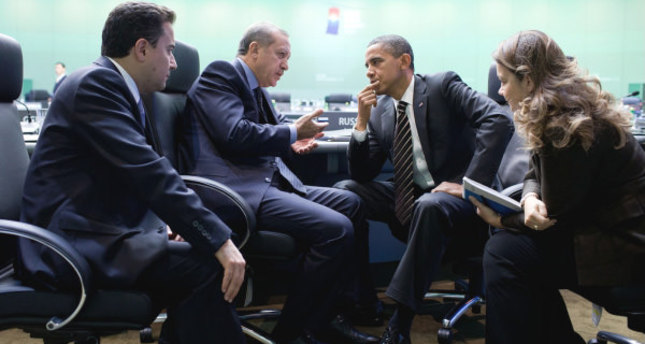 by daily sabah
Nov 12, 2014 12:00 am
Speaking at his party's parliamentary group meeting, Prime Minister Ahmet Davutoğlu said he will attend the G20 meeting on Wednesday with other ministers. "The G20 meeting constitutes a basis for economic and political consultations. Turkey will assume pro tempore presidency of the G20 as of Dec. 1, which means that Turkey will lead the world economy in the next year as well," he added.

Touching on the nine topics that were announced as part of the structural transformation, Davutoğlu said, "We have initiated a serious move toward transforming various fields. The success story that our country has written over the past 12 years is known by all. When we return from the G20 meeting, we will have determined the key elements of this program as a whole, including macro-economic transformation programs and eight other social transformation programs. As the first exemplary structural strategy that was prepared in line with the previous decisions made by G20 countries, our transformation program has attracted global attention."

Davutoğlu said that Turkey must show a serious upsurge in its foreign economic relations in the upcoming period, adding, "We need to lend impetus to our economic relations with the EU. I call on our business world to notice the most important market of Turkey's new production move is neighboring countries. Within this framework, no matter what the extent of political instability is in our neighboring countries, from the Middle East to the Balkans, we will increase our efforts to consolidate Turkish economic relations with such countries. To this end, I will visit Iraq at the end of this month while Iraqi Prime Minister Haider al-Abadi will also pay a visit to Turkey in the forthcoming months in an effort to invigorate the High Level Cooperation Council. In early December, we will hold a High Level Strategic Cooperation Council meeting in Athens. And Russian President Vladimir Putin will come to Turkey in December."

"Even though our neighbors are facing serious political instabilities, their people are our brothers and Turkey has the power to satisfy their needs in the field of economy," Davutoğlu concluded.