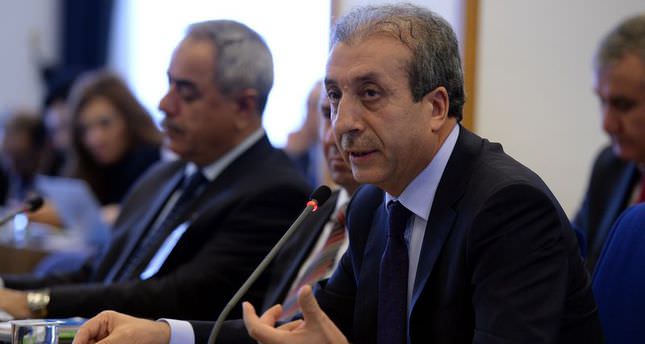 While Russia announces it is set to lose around $40 billion per year due to Western sanctions over the Ukraine conflict, Turkish Minister Mehdi Eker said Turkey's white meat exports - poultry and seafood - increased by 447 percent in the first nine months

Turkey's white meat exports - poultry and seafood - increased by 447 percent in the first nine months, the Turkish Minister of Food, Agriculture and Animal Breeding said on Monday. Mehdi Eker said: "Turkey's share of Russian imports increased in the first 9 months of the year compared with the same period last year. We predict a further increase next year."

Minister Eker visited The Anadolu Agency's Editor Desk on Monday and was interviewed by AA editors. Turkey is a major supplier of food and agricultural produce to Russia with $1.68 billion worth of trade last year. After the U.S. and E.U. imposed sanctions on Russia for its role in the conflict in Ukraine, Russia retaliated with restrictions on the importation of food from the European Union and other western countries in August. The restrictions created big opportunities for Turkey and Latin American nations like Brazil, which increased food imports to Russia.

In the first nine months of the year, Turkey's exports to Russia were valued at $4.5 billion with the main export products being textiles, yarn, fabrics, manufactured goods, vegetables and fruit. Turkish exports to Russia totaled $7 billion in 2013. Russian exports to the country stood at $19.4 billion in the period of Jan.-Sept of 2014. Touching upon the country's agricultural support programs, Eker said that " 31 percent of the budget has been given to the country's livestock sector," he said. The support program's budget is 9.7 billion Turkish lira ($4.4 billion) in 2014. Commenting on the huge price differences between producer and consumer prices for agriculture products in the country, Eker said: "We admit this, but this is not only related to his ministry. We can not find a solution without considering other parts of the food supply chain."

Sanctions imposed by the European Union and the United States on Russia's economy, which is largely dependent on exports of raw materials, block its access to international capital markets and also to technology. Russia's Foreign Minister Sergei Lavrov on Saturday accused the West of attempting to achieve "regime change" in Russia through sanctions that aim to destroy the economy and rouse public protests. President Vladimir Putin suggested Sunday that Russia could experience "catastrophic consequences" from sanctions, the falling oil price and the plunging ruble, while arguing that these would have knock-on effects for other countries.

"The modern world is interdependent. It's far from guaranteed that sanctions, the steep fall in oil prices and the loss of value of the national currency will lead to negative results or catastrophic consequences only for us," Putin warned in an interview with TASS news agency. Putin denied he has financial links to the Russian officials and businessmen from his inner circle who are targeted by Western sanctions blacklists. He said to impose sanctions on those individuals in an attempt to get to him was an approach based on a "false premise." Putin suggested that falling oil prices were due to "targeted steps by our partners on the world energy market."

Energy minister Alexander Novak said Friday that Russia was considering cutting its oil production in a bid to revive prices, as the falling price of crude along with sanctions over Ukraine have led to the ruble plunging in value. A major producer of crude oil, Russia is not a member of the OPEC oil producers cartel, which is to discuss later in the week whether to cut output. Russia gets around half of its revenues from oil profits. Its budget for next year, passed by the lower house of parliament on Friday, is based on an oil price of $96 per barrel.