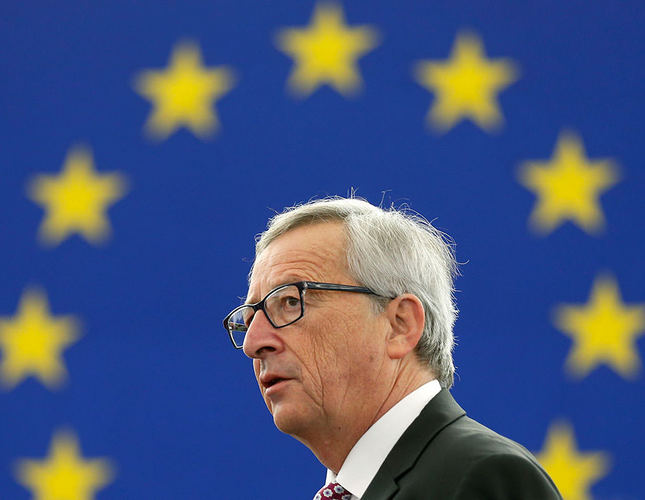 by French Press Agency - AFP
Nov 26, 2014 12:00 am
European Commission chief Jean-Claude Juncker unveiled a huge 315-billion euro investment plan on Wednesday to "kickstart" the stalling economy, saying it would show the world that Europe is back in business.

The eagerly awaited plan, the keystone of Juncker's five-year mandate, involves the EU setting up a 21 billion euro ($26 billion) fund with the aim of drawing in 15 times that amount in private investment.

Juncker hopes the proposal will boost desperately needed jobs and growth amid concerns that Europe's failure to recover from the financial crisis is dragging the world economy down with it.

"Europe needs a kickstart and today the commission is providing the jump cable," Juncker told the European Parliament in Strasbourg, France.

"We need to send a message to Europe and to the rest of the world: Europe is back in business."

The former Luxembourg prime minister said he had a vision of children in the Greek city of Thessaloniki going to a school filled with computers, and French drivers charging their electric cars by the side of a motorway.

His announcement comes a day after Pope Francis said in an address to the same parliament that Europe had become an "elderly and haggard" grandmother, and urged it to reclaim global leadership.

The new European Fund for Strategic Investment must be approved by leaders of the 28-nation EU - which together represents the world's largest economy with a population of more than 500 million people - at a summit in December.

Juncker took office as head of the European Commission -- the EU's executive branch -- on November 1 and immediately vowed to unveil the plan by Christmas so that it could be up and running as soon as possible.

"I promised to present an ambitious investment package by Christmas. Today Christmas has come early," he told parliament.

There have been criticisms that the fund contains no new money and only re-engineers existing funds, and of the calculation that the seed money will attract 15 times the eventual result, but Juncker rejected them.

"I often hear what we need is so called fresh money but what I believe we need is a fresh start and fresh investment," Juncker said, speaking in a mix of English and German. "The money we are putting forward today comes on top of what already exists."

He said the plan would not break the EU's strict budgetary rules, adding however that "money will not fall from the sky, we don't have a money-printing machine."

The run-up to the announcement has been dominated by a controversy over tax breaks offered by Luxembourg to major international firms when Juncker was premier.

Juncker faces a confidence vote in the European Parliament on Thursday after eurosceptic lawmakers filed a motion against him, but he is almost certain to survive.

Reaction to the investment plan in parliament was mixed.

Manfred Weber of Juncker's own centre-right European People's Party said the plan was "convincing" but called for EU states to make necessary reforms to their own economies.

Gianni Pittella, leader of the Socialists and Democrats, was more cautious, saying that 21 billion euros was merely a "good starting point" and that there was "still much to do."

Dimitrios Papadimoulis of the Greens meanwhile said Juncker's plan was not enough.

"It's a drop in the ocean. Your famous package is just business as usual, a Europe dominated by Germany and austerity," he said.

Overall responsibility for the three-year plan will fall to the European Investment Bank (EIB), a little-known EU institution based in Luxembourg that is often criticized for its lack of ambition.

Juncker's plan addresses the key problem for the European economy, namely a drastic lack of investment, which remains way off pre-crisis levels, in stark contrast to the United States.

A list of projects is currently being drawn up by EU and EIB officials, with the input of member states.

Officials hope the fund can be operational by mid-2015.

Once up and running, a team of financial experts at the new fund will help decide projects, mostly based on their level of advancement and how likely they are to draw in private investors.