‘Aim is to transform Turkey into economic, moral heavyweight’ 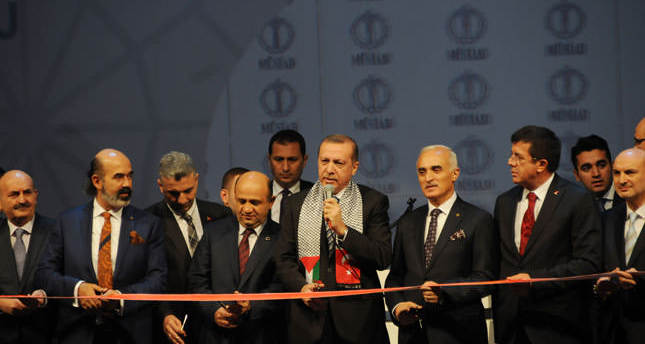 Speaking at the annual summit of business group MÜSİAD, President Erdoğan said Turkey’s growth into an economic power would go together with increased moral responsibility toward the world

President Recep Tayyip Erdoğan said Turkey will continue to be the voice of global conscience as well as the rising star of the global economy. The 15th MÜSİAD International Forum and 18th International Business Forum (IBF) Congress organized by the Independent Industrialists' and Businessmen's Association (MÜSİAD) started at the Istanbul CNR Expo Center yesterday. President Erdoğan, the Minister of Science, Industry and Technology Fikri Işık, Minister of Development Cevdet Yılmaz, Minister of Economy Nihat Zeybekci, Head of MÜSİAD Nail Olpak, various leaders from the Islamic world, politicians and more than 7,000 businessmen attended the opening ceremony. President Erdoğan began his speech saying, "I welcome all our guests who have come to Turkey and to our beautiful Istanbul from 80 cities and many foreign countries to attend the events that will run for five days. The forum and expo is meant to be comprehensive and diverse in terms of participants, meetings and the matters to be discussed."

President Erdoğan said, "I believe the forum and expo, to take place simultaneously with the 30th meeting of the Islamic Cooperation Organization's Economic and Commercial Cooperation Committee (İSEDAK), will increase its significance and efficiency."

Emphasizing the positive economic developments and investment opportunities in Turkey, President Erdoğan said "With its strong financial structure, disciplined finance, stabile politics and environment of confidence, Turkey has proved itself to be an excellent country, a unique opportunity for investments, for trade and for establishing cooperation with." The private sector's radar systems, unmanned aerial vehicles, Turkish infantry rifles, rocket systems, communication and information projects were displayed for the first time at the MÜSİAD International Forum. "I personally started some of these projects during my prime ministry term and I promoted on-going projects in every step," said Erdoğan. "We ensured and encouraged both these projects and many other projects without being interrupted despite the global crisis environment. The Turkish economy has passed through a serious period of change; in fact, it is still passing through. The Turkish economy is maintaining itself by growing despute passing over regional and global crises without surrendering to the attacks made from home and abroad."

President Erdoğan emphasized economic inequality throughout the world and said, "We will continue to be the voice of global conscience. If the concern wasn't filling luxurious cars with the oil, if the concern wasn't energy resources, oil, gold, diamond, children wouldn't be murdered in Iraq, Syria and other oppressed countries. If the problems in Iraq were solved, the war in Syria would have stopped."

The MÜSİAD International Forum, organized under the motto of "World is Changeable: Change the Business, Change the World," Pthe resident of MÜSİAD, Nail Olpak, said that the global financial system must be reconsidered, as justice and honesty is the center of business and "In our belief, trade is permissible, but interest is forbidden." Speaking at the ceremony, Science, Industry and Technology Minister Işık said that small and medium Enterprises were the engine of Turkey's production and added that now the main element of development and sustainable growth is production. "We all witnessed how economies that are widely dominated by factors besides production came to a halt after the economic crisis in 2008. Turkey was lucky that it didn't get very adversely affected from the crisis. However since then, production and industry was the first priority of the government," said Işık. He further underlined the importance placed of manufacturing industry while the rest of the world was placing less and less importance on the manufacturing industry. Underlining the importance governments placed on SMEs, Işık also said that SMEs play a major part in economic growth.

On the importance of the expo, the Minister of Economy Nihat Zeybekci said that in the past, when he was a businessman, Turkish companies used to attend various prestigious expos around the world and highlighted the lack of international fairs organized in Turkey. "Now, one of the most important expos in the world is being held in Turkey," added Zeybekci. Stating that the foreign trade volume of Turkey has increased by 100 times since the 1980s, reaching $475 billion from $5 billion, Zeybekci added: "Our exports have reached $159 billion. Between 1974 and 2002, the construction business undertaken from abroad was around $40 billion, which has now increased to $253 billion, making Turkey the second country with the largest construction industry following China."

The 15th MÜSİAD International Forum and the High Tech Port by MÜSİAD technology fair will be open to visitors for five days until November 30, in Istanbul CNR Expo Center in seven halls.