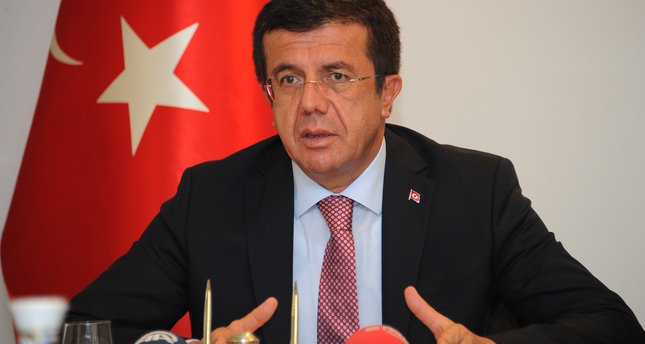 by Daily Sabah Nov 28, 2014 12:00 am
Answering the questions of Istanbul Chamber of Industry's (ISO) members during November's assembly of the chamber, Economy Minister Nihat Zeybekci warned banks and factoring companies, also known as debtor finance companies which lend at high interest rates, That the government will do what is necessary to control such organizations. Zeybekci stated that the ministry would closely follow public tender specifications and would abandon its current "just in case" approach and make the process more accessible, adding, "One of the most important issues we need to tackle is the triplet of inflation, interest rates and the current account deficit. As a country, we need to review our fight against inflation. If we boost production and supply, this will be a better way of overcoming inflation for us. Our priority is to increase production and exports. We will achieve much lower interest rates by controlling inflation." Touching on deliberate and false perception management regarding inflation and interest rates in Turkey, Zeybekci stated, "Some argue that bringing down the benchmark interest rate is technically impossible due to inflation which is currently around 9 percent." Zeybekci underscored that this is a completely incorrect argument as interest rates should be compared to anticipated inflation rather than actual inflation.

Saying that current interest rates are hovering around 14-15 percent and rarely around 12 percent at the best, Zeybekci warned banks and factoring companies that lend at high interest "we will not allow this and we will do what is necessary to regulate them. If the year-end anticipated inflation rate is realized at around 6 percent or if you impose 14 percent interest upon industrialists, SMEs and tradesmen, or if the real interest paid is 100 percent, then this is unbearable and unsustainable for Turkey."

Zeybekçi further added that interest rate lobby groups in Turkey manipulated the pretext of the U.S. Federal Reserve's (Fed) interest policy. "Of course, we are affected by the Fed's decisions, but this should not be to the same extent as Brazil and South Africa are affected. We will closely follow the problem of high interest rates which is trickery in Turkey," Zeybekci said, reiterating that the downward trend in interest rates should be maintained.