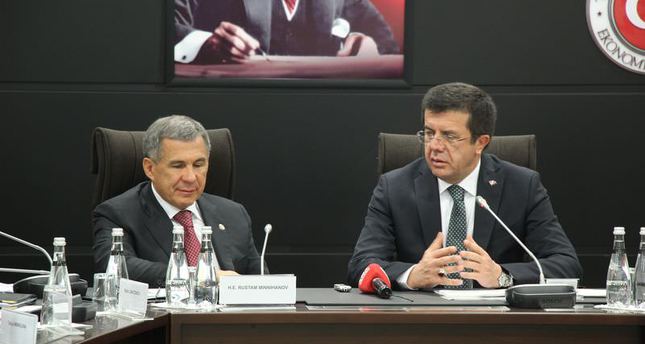 Speaking to the press before the meeting, Minnikhanov said that his country had taken steps towards hosting the next summit in the capital of Tatarstan, Kazan.

He requested Turkey's support for their bid and Zeybekçi responded by thanking President Minnihanov for his efforts.

The Turkish economy minister stressed that the Tatar people's perception of Turkey is very warm and that the country has a significant contribution to cementing the ties between Turkey and the Russian Federation.

"We believe Tatarstan will become one of the locomotives in our target of reaching $100 billion trade volume between Turkey and Russia by 2023," Zeybekçi said.

Stressing that current trade volume between Tatarstan and Turkey is far from its potential, Zeybekçi underscored the importance of business forums to bring Turkish and Tatar businessmen together.

The Republic of Tatarstan is a federal subject of the Russian Federation located in the western Volga Federal District.