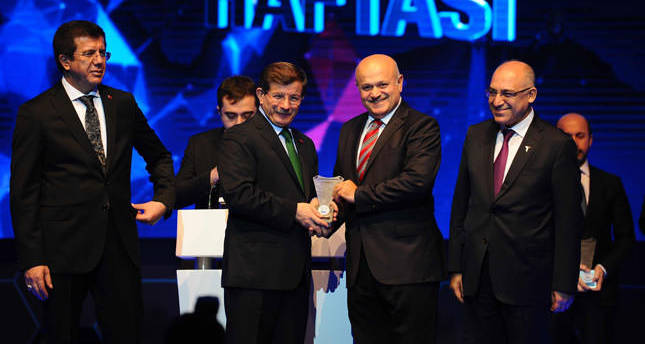 To reach the target of becoming one of the 10 biggest economies in the world by 2023, Turkey focuses on R&D activities, innovation and new inventions where state-of-the-art technologies are applied

Speaking at Turkey's Innovation Week 2014 Istanbul organized by the Turkish Exporters Assembly (TİM) with the support of the Ministry of Economy, Prime Minister Ahmet Davutoğlu referred to Turkey's target of becoming one of the 10 biggest economies in the world and added: "If we want to be among the top 10, then we have increase to the top 10 percent in global competition instead of remaining in the 45 percent range and our innovation levels should increase by 20 percent."

Turkey currently is the 17th in the world in terms of gross national product and 54th in innovation. Davutoğlu said that the increase in exports from $36 billion to $160 billion that has been achieved under the current paradigm and that increasing it to $500 billion would require a paradigmatic boost. "Such a boost can only be achieved with the research and development activities, innovation and new inventions where state-of-the-art technologies are applied," said Davutoğlu.

In the 1960s, Turkey's economy was based on import substitution and production was mostly for the domestic market and was non-competitive. However, after the Turgut Özal era, competition and reaching global markets became the main topic on the agenda and fierce competition started after Turkey's entry into the Customs Union. "The share of low-tech products in Turkey's export is decreasing and the share of the manufacturing industry in exports is 92.6 percent, while high technology products are around only 3.7 percent and medium technology is 31.9 percent. In other words, high and medium technology products account for 35 percent of our exports but we want to increase this to 40 percent in 2018," Davutoğlu said and that the government's target is to increase the share of high technology products in export to 15 percent by 2023. The prime minister requested businessmen to also invest in science departments of universities and not only techno parks since students also needed practice and noted that the education system should be examined in order to provide the conditions required for inventions. "When an envisagement is turned into an idea and this idea turns into a new invention, then we will need the practical stage, the research and development, the technology stage. We need the tools to turn such ideas into Technologies, we need research and development centers," Davutoğlu said.

He further noted that as the government they will support any transformation programs in the real sector for commercialization of research and development activities. Touching on the problems in commercialization of new ideas and innovation in Turkey in terms of patents and brandings, Davutoğlu noted that a boost in this area is required. "On the other hand, we can easily adapt to new Technologies. That is why the high-tech products account for 14.4 percent of our exports and only 3.7 percent of our import. This reveals that while we purchase technology and adapt to it, we cannot produce it at the same speed," Davutoğlu said.

Zeybekci noted that countries capable of designing, developing and marketing new products have a sustainable competitive power and economy and dominate the global markets. He added that countries that produce information also produce the persuasion and perception and finally the decision. Stating that while Turkey is currently switching from being a "producing country" to a "designing country" with $160 billion of exports, Zeybekci said that in order to reach the targets set for 2023, at least 3 percent of the GNP should be reserved for research and development activities. He further noted that Turkey should become a country with a steady high-technology intense industry and that has unique brand and marketing networks.