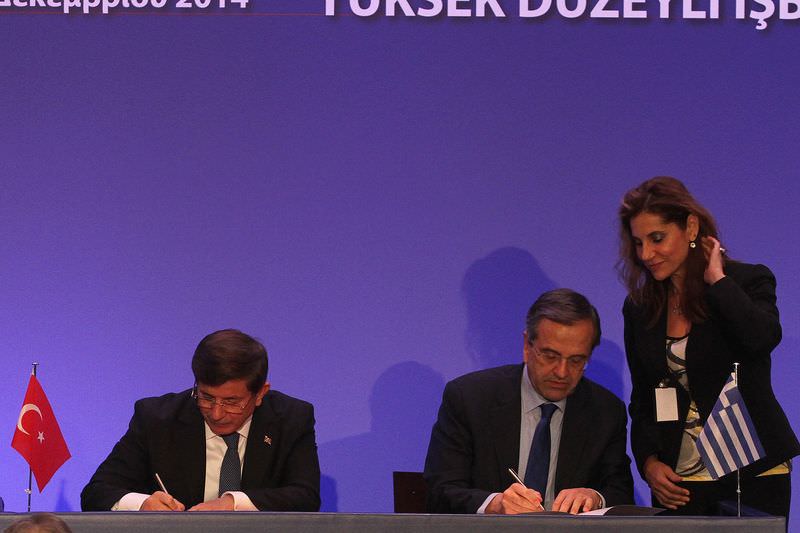 Addressing the Greek-Turkish Business Forum in Athens, Davutoğlu said, "Turkey wants a strong Greece so that together we can strengthen the future of our two countries and our positions in Europe."

The forum gathered Turkish and Greek ministers and businessmen. Davutoğlu gave an outline of his vision to transform the historical and deep-rooted relations between the two neighbors into a permanent friendship. The premier said he agreed with his Greek counterpart Antonis Samaras that the economies of the two countries complimented each other.

He added that Ankara would like to work with Athens also in the European market. "As a friend and neighbor country, Turkey wants Greece to have the strongest economy since it sees the stability and welfare of Greece as that of itself," the premier said.

Davutoğlu highlighted the business community's role in further developing bilateral relations. He said politicians could consolidate mutual trust and stability by scaling up bilateral relations in investment, trade and tourism. Referring to the cooperation council between Greece and Turkey, he said: "The message of the council meeting is that it is time to cooperate, and it is time for the businesspeople to take the stage."

He said policymakers should pave the way for the business world by signing bilateral agreements and minimizing bureaucracy to provide a suitable ground for trade and investments. "The more economic dependence and interdependence increases, the less conflicts and tensions we have," he said.

The premier also emphasized the sectors of tourism, banking and finance along with food safety as business opportunities. "Turkish and Greek companies can also cooperate in third countries," he added.

Samaras addressed Davutoğlu as "friend Mr. Prime Minister" and said he believed that the economic and business cooperation was a necessary element for good transnational relations.

"This is more important between neighboring countries that cultivate political stability and trust amongst them. Then new paths of financial and commercial contacts arise for the benefit of both nations," he said. "We need stability and trust, and we are at this point now," said the Greek premier.

"There are unused opportunities for further expansion of economic relations in sectors such as high technology, construction, transport and tourism," he said. "Beyond these, we have developed a significant framework of bilateral cooperation and there is a complementing factor in the economies of both countries. It is necessary to continue building a good neighborly relationship and trust," he added.