Current account deficit to get lowered by falling oil prices 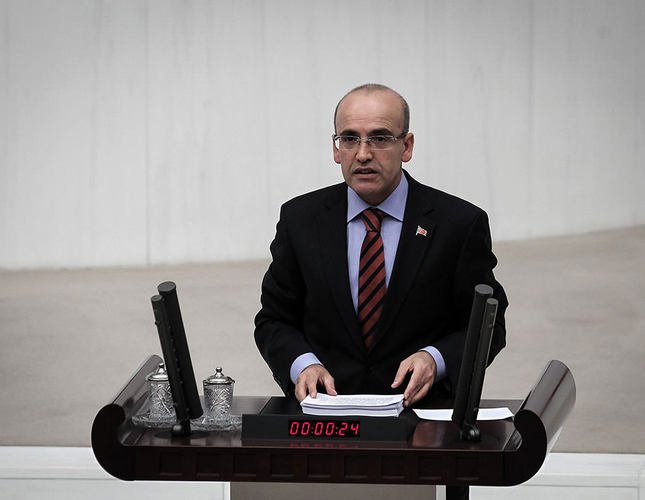 Finance Minister Mehmet Şimşek says if the current downward trend on oil prices continues, Turkey’s current account deficit will be under 4 percent in next year

Negotiations for the 2015 budget have started in the General Assembly of the Turkish Parliament. Giving a presentation about the budget, Finance Minister, Mehmet Şimşek offered an evaluation of the global economy. Şimşek said that there are still some problems faced by the global economy, although it has been six years since the global crisis was over, and the world has still not managed to go back to the pre-crisis period.

Emphasizing that the global economy will grow by 3.3 percent in 2014, which is below expectations and potential, Şimşek said that "The real reason is the U.S. economy growing less than expected, stagnation in the eurozone, geopolitical conflicts and slowdown in the growth of emerging economies."

Şimşek noted that global growth is expected to be 3.8 percent in 2015 and around 4 percent between 2015-2019, which is well below the 5 percent growth that it managed to reach during the pre-crisis period.

Şimşek remarked that growth performance in emerging economies is low compared to the pre-crisis period because of the weak demand and structural problems which were partly caused by the relatively tightened global financial conditions, a slowing down in Chinese economy and low commodity prices.

Global inflation remains low due to the impact of a limited recovery in global economic activities, Şimşek said, continuing, "The IMF estimates that global inflation, which was 3.6 percent in 2013, will reach 3.9 percent in 2014 and 2015. In the case of the permanent decline that has recently been seen in energy and industrial metal prices, the global inflation may fall short of estimations."

Commenting on the risks for the global economy, Şimşek said, "The main risk for the global economy is the continuation of slow growth in the eurozone, and that the region may enter a deflationary process similar to the one Japan experienced in the 1990s. This is one of the greatest risks for the Turkish economy as well. The further slowdown in the growth of developing countries' economies, and the sharp decline in the Chinese economy emerge as another major risk. Another risk is that the Fed's interest rate hike may create an extreme volatility in financial markets, reversing the course of capital flows. The fact that European and Japanese central banks continue to implement expansionary monetary policies balances these risks to some extent. Furthermore, the escalation of geopolitical tensions is another risk that may bring down the outlook of global economy."

Şimşek also said that the current account deficit, which was $465 billion in 2013, dropped to $46.7 billion on a 12-month basis as of September 2014, while the balance excluding gold and energy turned into a surplus of $7 billion from a deficit of $4.1 billion.

Şimşek stated that despite the economic recession and geopolitical problems in trading partnerships experienced in 2014, exports displayed a positive performance as a result of market and product diversification policies and competitive exchange rates, while imports slowed down considerably due to the impact of the slowdown in domestic demand.