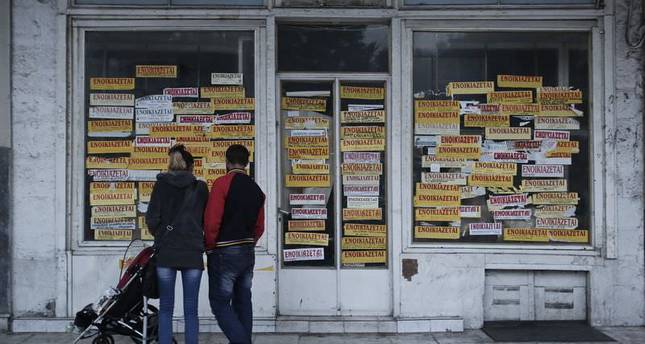 by Dec 10, 2014 12:00 am
Shares listed on the Athens Stock Exchange nosedived on Tuesday due to increasing political instability shaking Greece that threatens to unravel its bailout programme.

The Athens benchmark index fell by 12.8 per cent, the biggest one-day drop in 27 years, after the government announced presidential elections will be pulled forward by two months to December 17.

The political uncertainty has renewed fears that the country could be forced to exit the eurozone if that vote leads to national elections that install a government that does not back efforts to get Greece's economy on track.

Alexis Tsipras, leader of the opposition SYRIZA party, has said he will demand debt restructuring, raise wages to pre-crisis levels and rehire laid-off state employees, if in power. Together, those moves would danger the country's economic recovery.

"The markets are always very sensitive to poltical uncertainty ... but I believe that if Prime Minister Samaras chose this way it is because he is confident in his capacity to have a successful election of a president in the two weeks to come," Moscovici said.

The battering at the Athens Stock Exchange came hours after Greek Prime Minister Antonis Samaras named former European commissioner Stavros Dimas as his presidential candidate, setting up a vote that could indirectly decide whether Samaras keeps his job and how the country proceeds in its efforts to revitalize its economy.

The vote had initially been scheduled to take place in February.

Dimas, 73, will stand for president - a largely ceremonial role - in up to three rounds of voting taken by legislators on December 17, 23 and 29.

"He is widely regarded as a person who unites and inspires. He united citizens beyond their party preferences and inspires gravity, trust and respect," said Samaras.

"He is also appreciated by Greek society and respected by the international community," the prime minister added.

The coalition government led by Samaras has 155 members in Parliament. If Dimas is not elected, the government has said it will force early parliamentary elections.

"The presidential election has become a pretext to force early elections. So, while we have stabilized financially and finally entered a recovery period, clouds of political uncertainty started to gather once more over Greece," said Samaras.

Dimas served as European Union commissioner for the environment from 2004 to 2010 and as Greek foreign minister from November 2011 to May 2012. He is currently the vice president of the ruling New Democracy party.

The election for president requires obtaining 200 votes in the 300-seat parliament in the first round. If that bar is not reached, a second round requires 200 votes. Winning the third round requires 180 votes.

Only the government can put forward a candidate for the up-or-down vote. Opposition parties cannot suggest alternatives.

SYRIZA welcomed the early presidential poll, saying it will lead to the party's victory.

"We have every reason to hope for a happy new year," said Tsipras, expressing confidence that the elections will lead to a "government of salvation with SYRIZA at its core."

Opinion polls show the far-left anti-bailout SYRIZA party ahead of the conservative-led coalition if there were to be parliamentary elections in the near future.

Opposition lawmakers have indicated that they will not back any candidate named by the coalition government, to force national elections.

The decision by Samaras to fast-track the election process of the country's head of state came shortly after a decision by eurozone ministers to give the county more time to meet its bailout requirements. The existing agreement had been due to expire at the end of December.

For months, creditors - which include the European Commission, the European Central Bank and the International Monetary Fund (IMF), collectively known as the troika - have refrained from returning to Athens to conduct direct negotiations on the country's bailout programme, insisting it has not met outstanding austerity demands.

The government has been hamstrung in its attempts to stick to the programme because it is so unpopular among average Greeks. The move to austerity has come amid soaring unemployment and a slumping economy.

The deadlock has also postponed discussions concerning the country's post-bailout era and possible credit line in 2015.