Arms exports from Turkey up 20 percent 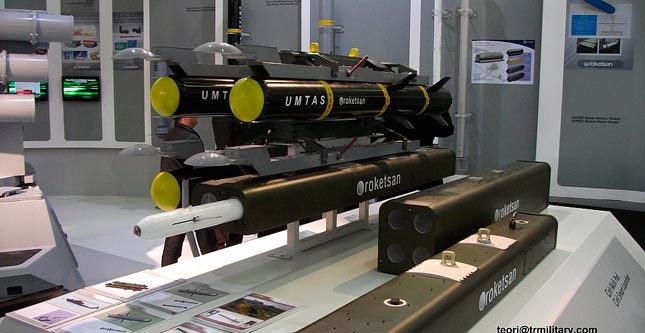 by AA Dec 11, 2014 12:00 am
Turkey's defense exports for the first 11 months of 2014 increased 20 percent compared to the same period last year, according to the national association of exporters.

Turkish defense exports stand at $1.5 billion, official figures from the Turkish Exporters' Assembly, which were released on Thursday, indicate.

The U.S. was the largest purchaser of Turkish defense hardware, for a total of $508 million. Other major markets were Malaysia at $109 million and the United Arab Emirates at around $87 million.

The defense industry products make up slightly over one percent of the overall total exports, which are valued at $144 billion for the January to November 2014 period.

Turkish exports in the defense and aviation industries reached $1.39 billion in 2013.

Ismail Demir said that Turkey aims to have defense companies among the top 100 in the world and to create at least three global brands in the defense sector.

"Yes, we have a lot of work to do, but the return on investment in the defense sector is very high," he said. "In addition, a good value-added product earns a high price on the market. The Turkish Armed Forces are a very important reference which attracts attention to Turkish products in the international market."


The Turkish officials have often said that boosting the country's defense industry exports was one of its strategic goals. Ankara spent over $1 billion on defense, research and development in 2013. Turkey's defense industry has gained momentum in recent years, namely thanks to an expansion of local producers.

Meanwhile, Turkey's defense spending was 29.4 billion Turkish liras, or $13.2 billion, this year, according to the Turkish Defense Ministry.

Turkey spent about 1.71 percent of its Gross Domestic Product on defense in 2014. This is far less than was spent in the past;

Turkey is currently negotiating a $3.5 billion deal for a long-range air and anti-missile defense system, including local production, with suppliers from China, the U.S. and Europe.