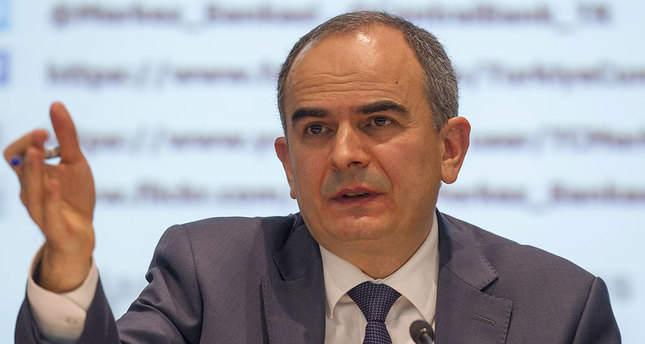 by Daily Sabah Dec 17, 2014 12:00 am
During his presentation to the Planning and Budget Commission, Central Bank of the Republic of Turkey (CBRT) Governor Erdem Başçı noted that tight monetary policies would continue until a significant improvement is observed in inflation, and until exports continue to support the growth rate.

Positive developments in foreign trade rates and the mild progress observed in consumer loans will support improvement in the current account balance according to Başçı. He added that the macro precautions taken and the tight monetary policies are affecting the inflation trend of core goods.

During his presentation, the governor also stated that inflation expectations, pricing trends and other factors closely affecting inflation are being observed thoroughly and repeated, and that until a significant improvement in the inflation rate is observed, tight monetary policies will continue to be applied by keeping the yield curve horizontal.

Başçı further noted that inflation rates are compatible with the outlook indicated in the Inflation Report for 2015 and said, "With the initiation of the structural transformation program, Turkey's potential for growth is expected to increase gradually."

Members of Parliament from both the AK Party and opposition parties stated that the CBRT, which mainly targets price stability, should include growth and employment to its set of policies as well. "The growth rate is decreasing and in this respect, shouldn't we apply a new set of politics?" asked members of Parliament.

In response to such demands, Başçı said: "While the actions of the Central Bank of Turkey were aimed at mostly restoring and maintaining price stability, we were criticized when we included the current account deficit and financial stability in our set of policies. We established a Financial Stability Board, and currently, we are discussing supporting growth and employment to be included in our set of policies."