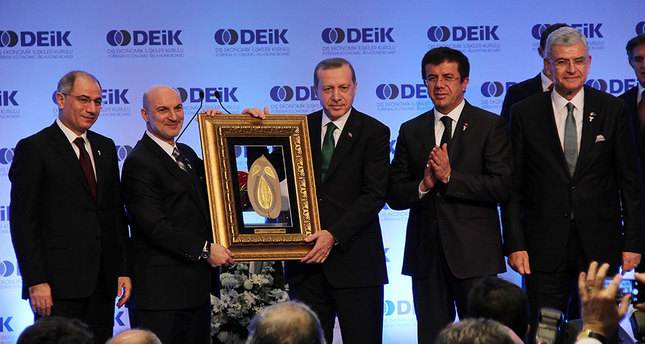 President Erdoğan emphasized the importance of low interest rates to increase the competitive power of exporters, the area in which he said he failed to succeed during his time as prime minister

President Recep Tayyip Erdoğan, speaking at the Foreign Economic Relations Board (DEİK) General Assembly over the weekend, described high interest rates as an "atrocity" and criticized the central bank for insisting on keeping the interest rates high to the detriment of the economy. Erdoğan said that high interest rates, which they addressed continuously, were one of the topics that he failed to handle during his term as prime minister and voiced his regret.

Erdoğan noted that the central bank's interest rates hit around 15 points when commissions are added, despite low interest rates of around 1 point in the U.S., Japan and Europe. Our economy has been tested many times over the past 12 years, and we managed it successfully, said Erdoğan, adding, "The upward trend in exports is continuing strongly."

Erdoğan insisted on his severe criticisms of the financial sector: "Let us revisit loans with high interest rates. We need to bring down interest rates to encourage our entrepreneurs and investors. As long as they invest, our production, employment and exports will increase with the improvement in the competitive power of our exporters. Not the real sector, but the financial sector makes the most money without much effort. Then, we have to join hands and smooth the way for our investors. Investors and the financial sector are in need of each other, and they are inseparable."

Turkey is not the EU's doorman, stated Erdoğan, continuing: "Let alone succumbing [to other countries], Turkey is never a country to be scolded and ordered. Turkey will lose nothing from its prestige and growth." Erdoğan encouraged Turkish businessmen to insist on their way, saying, "Nothing could hamper us, we will move on our path with commitment."

Addressing international credit rating agencies that publish false reports and biased credit scores on Turkey, Erdoğan remarked: "We need to be careful and reach 2023 [goals] with determination, patience and courage without facing any obstacles. They will strive to bring back the old Turkey; we will strive for the new Turkey." Economy Minister Nihat Zeybekci said that the reason for Turkey's current problems and confusion was sharing interests with past habits and quarrels over Turkey's strategic significance in energy.

Touching on Turkey's political, democratic and economic development, DEİK President Ömer Cihad Vardan likened Turkey to a precious gemstone in the midst of a region that is being devoured by a great fire and added, "Turkey is continuing to solve problems in the region as an island of democracy, peace and stability. The Turkish private sector has become one of the largest industrial production centers in the Eurasia region. As Turkey gets stronger, its enterprises become a global brand; as the competitive power of companies increases, the country's prestige grows."