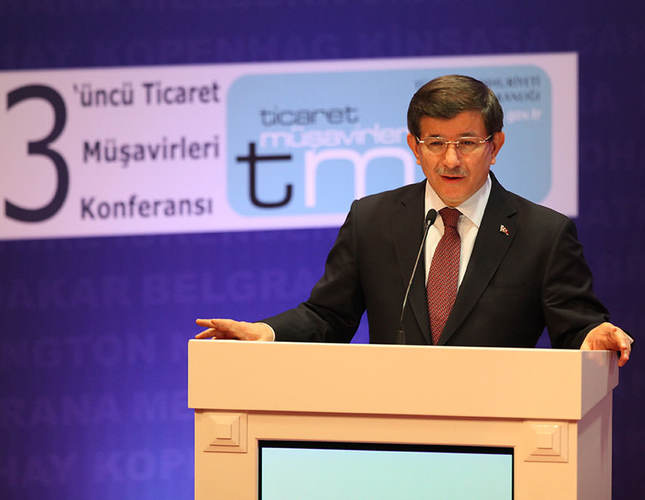 The third Commercial Counselors' Conference, which has become an annual tradition organized by the Finance Ministry that brings all Turkish commercial counselors from around the world together, was held in Ankara yesterday, chaired by Prime Minister Ahmet Davutoğlu. Speaking at the conference, Davutoğlu projected four targets for counselors involving Turkey's economic potential and the opportunities that could be utilized to boost trade between Turkey and the host country.

Davutoğlu said during his speech, that following the economic crisis in 2008, many countries have withdrawn from global economics. "The Ambassadors' Conference and Commercial Counselor Meetings are one of the traditions that have a positive effect on the economy. We organize these meetings in order to discuss Turkey's position within the global economy and its strategies. Our commercial counselors are one of the most important actors that provide feedback on how to proceed," Davutoğlu said, addressing two of the traditions that began in 2008. He also requested consultants to be dynamic, active and persistently strive to succeed.

The third expectation of the commercial counselors is to ensure that they are in close contact with the Turkish private sector and business world, and keep potential investors informed of all possibilities and potential opportunities as well as the ongoing and future projects that may be beneficial for Turkish companies. "Turkey, which applies a free market economy, defines and implements targets through its business world. Therefore, our commercial counselors should act as a representative of Turkish companies, keeping them informed of all related opportunities. Turkey's international economic performance can be measured by the performance of the public sector," Davutoğlu said.

The forth expectation the counselors should be engaged in, is establishing and maintaining close relations with the business world, and with the chamber of commerce in their assigned foreign country. He further added that the government demands that these counselors be in the field and actively involved in the markets, day and night, as well as function as a team.

Davutoğlu said it is possible to cluster countries in four main groups, adding, "The first cluster comprises the EU member states. Each of you should already plan how relations with those countries will be affected and provide us with accurate analyses. Now, there is Turkish industry within the EU. We have sectors exerting a serious impact. Follow sectorial transformation programs that we have recently announced."

He noted that the third important country group concerns initiative regions. "Africa, Latin America and Asia-Pacific are important regions. When we look at previous periods, their place in our economy was very limited. Africa is a place that will be globally competitive in the world in the upcoming period. We should already be prepared in competitive terms," Davutoğlu said.

Recounting the famous quote of Mustafa Kemal Atatürk, the founder of the Turkish Republic, "There is no defense line, there is a defense area. This area is all of the home country," Davutoğlu said the area that requires the government's focus is now the whole world. "We will motivate the private sector. When it comes to relations with Africa, your task is not only about increasing foreign trade volume. What you need to do is [to know about] investment opportunities in every country. We can improve original models in the agricultural field based on Turkey's experience, and contracting services, roads, urban transformation and the rise of prosperity will be reflected in Africa. We need to set new horizons to transition to Africa's mineral resources," Davutoğlu emphasized.

Davutoğlu also remarked that the fourth country group is the one that needs special attention. "Our foreign trade volume in our relations with the U.S. is not at the desired level. It is necessary to gain a totally new perspective. We need to introduce a new organization to our commercial consultancy system in the U.S. At the same time, we need to be all over China. We have to care about how we can change the nature of our relations with China alongside our own perspective, as with India and Russia as well, due to our close relations with these countries," Davutoğlu concluded.