Deputy PM: Inflation will fall below 6 percent by March 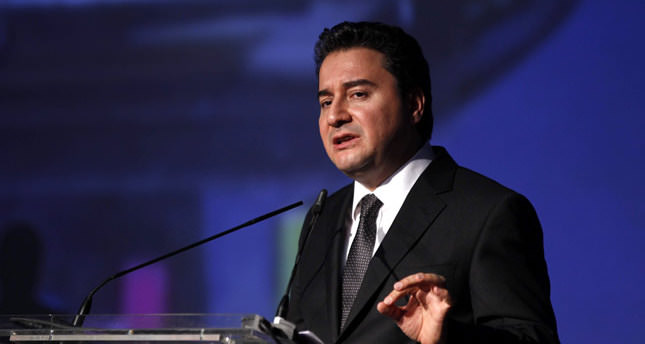 The Ministers has given their predictions on inflation in 2015. Deputy Prime Minister Babacan predicts inflation will fall to 6 percent around March and Finance Minister Şimşek expects it to hit 5 percent

Deputy Prime Minister Ali Babacan gave a presentation to businessmen in Ankara where he commented on major economic issues and said the government is expecting inflation is predicting to drop to 6 percent around March and April. Speaking at the Extended Chairmen Meeting of the Independent Industrialists' and Businessmen's Association (MÜSİAD), organized at the Rixos Hotel, Babacan announced that currently, the adverse effects of the increase in foreign exchange prices and food prices are diminishing; he also asserted that without a new wave of fluctuations caused by foreign exchange prices, the inflation rate in 2015 is expected to fall below 6 percent. However, Finance Minister Mehmet Şimşek said that if oil prices follow the current trend, inflation will drop to 5 percent in 2015.

Noting that the current account deficit is now on the decline as a result of the precautions taken in 2013, Babacan added that the rate of inflation might fall to 6 percent before the end of the year, even as early as March and April. While he defined the growth figure in 2014 as "disappointing," the deputy prime minister also said that given the disruptions and clashes in neighboring countries such as Iraq, Syria and Russia, a 3 percent growth rate cannot be deemed a bad result since this figure is higher than the rates observed in most of Europe. He further highlighted that the average growth rate in Latin America and Central and Eastern Europe is around 2 percent, and this figure is below the 3 percent in most of Asia excluding China and India.

Babacan emphasized that expectations are higher and more optimistic for this year, and added that they are expecting improved results in 2015 in terms of both domestic consumption and foreign demand.

According to OECD data, Turkey's average annual growth rate is expected to be around 4.7 percent, and Babacan underscored that such a figure might be higher if the structural economic reforms and the action plans announced by the Prime Ministry are properly implemented in a timely manner. Highlighting that the global economy is expected to recover this year, Babacan said that it is difficult to achieve pre-crisis growth levels, however. Moreover, central banks may also need to amend their related policies. "Recently, the FED has stopped its monetary expansion policy and gradually halted its asset purchases under its Quantitative Easing program. This will backtrack in 2015, though how fast and when is not certain. But what is certain is that the change in the FED's monetary policy will be one of the major topics on the agenda," Babacan said, adding that the government has taken precautions to minimize the effects that the news of the FED's future actions have on the economy, as every scenario has been discussed and which government body will act in what way has already been determined.

Furthermore, despite the steps towards monetary expansion taken by the European Central Bank, Babacan underscored that Europe is still on the verge of deflation since no matter how low the interest rates are, the lack of trust and implementation of necessary structural reforms prevent any measure of economic improvement and recovery from taking place. "Europe does not only have budget deficits, but it also lacks strong political leadership. Therefore, any lack in management, wrong policies and even a momentary lack of attention might have serious consequences. In short, economic recovery is still weak and the economy is fragile in Europe," Babacan said. Commenting on the decreases observed in crude oil prices, Babacan said that this would have a crucial effect on the global economy, and highlighted that Turkey has not loosened its policies as a result of these decreases, as a surge in crude oil prices can happen at any moment. "The benefit we have gained from the global decrease in crude oil prices will be maintained as an additional reserve in order for our country to be ready for any crisis in the future. We have taken measures against any increase in oil prices," Babacan emphasized.

He also touched on the increase in the labor participation rates and said that Turkey has one of the most rigid labor markets in the world. Moreover, while the Ministry of Economy is aware that flexibility in the market will help decrease unemployment rates as observed in other countries that apply more flexible policies to the labor market, it is crucial for the required steps to be taken at the right time in order to achieve this. The deputy prime minister also discussed the increase in credit volume and underscored the importance of the measures that have already been taken. He also noted that despite such measures, there was no decline in commercial loans and that they are trying to support exporters, the manufacturers and SMEs by providing wider access to loans. "There is a 25 percent increase in loans granted to SMEs. Now, each bank offers a new SME loan program, which is a new and a major improvement for our country," Babacan concluded.