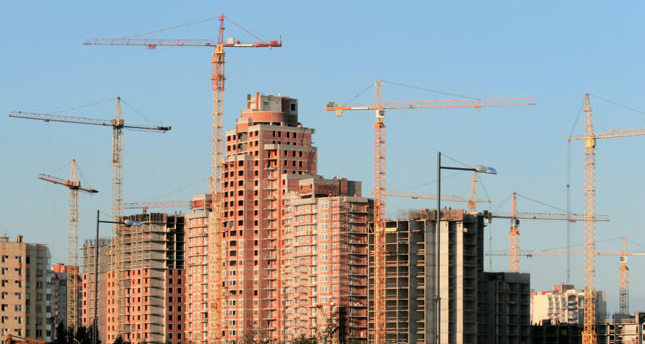 The construction sector maintained its importance with its contribution to decreasing Turkey’s current account deficit and has undertaken projects totaling $22.5 billion abroad in 2014 with bigger aims for 2015

Economy Minister Nihat Zeybekci has announced that the Turkish construction industry undertook projects totaling $22.5 billion abroad in 2014. "The Turkish construction industry continues to be one of the leading sectors in the world and is one of our major exports. It also contributes greatly to the decrease achieved in the current account deficit," said Zeybekci in a written statement.

Turkey's construction investments abroad began with the port project implemented in Libya in 1972 and continue to be one of the most developed and competitive sectors in Turkey's service exports. The sector is also the driving force behind the Turkish economy, as it has increasingly strengthened its reputation around the world.

Zeybekci underscored that in the last 42 years, the sector has undertaken more than 7,684 major projects worth more than $300 billion in 104 countries. Moreover, despite political instability and recurring problems in the region, the sector concluded projects worth $22.5 billion in 2014. According to data from the ministry, Turkmenistan, Russia, Algeria, Qatar and Kazakhstan were the countries where major projects were undertaken by the Turkish construction sector in 2014.

Zeybekci also announced that while an average project was worth around $20 million in the beginning of the 2000s, today's project's average worth is more than $88 million and are often major projects with high added value that require the use of advanced technologies.

The Warsaw Metro Project in Poland, the Doha Metro Project in Qatar, Ashgabat International Airport in Turkmenistan, the Awash-Weldia Railway Project in Ethiopia, construction of Sipopo Congress Place, which was deemed the "Best Global Culture Project" by ENR in Equatorial Guinea, Baku International Stadium in Azerbaijan and the St. Petersburg Tunnel and Bridge Project in Russia were some of the most advanced and major projects undertaken last year.

Turkey's construction projects abroad also create important sources of income in the form of construction revenues, logistics, workers' revenues, export goods and services connected to the industry. Zeybekci highlighted that Turkey's ability to exceed $22 billion in foreign construction projects since 2006 was enabled by utilizing the country's advantages such as highly skilled work power, technical expertise, technological adaptation ability, business experience and discipline, as well as Turkey's ability to benefit from its geopolitical location, its close economic and cultural ties with the countries in its vicinity and the effective coordination and collaboration between the public and private sectors.

According to Zeybekci's statement, more than 90 percent of the projects assumed by Turkish builders have been performed in the Commonwealth of Independent States, the Middle East and Africa. He further noted that political developments since 2013 in North Africa and the Middle East as well as recession that Russia has experienced since the second half of 2014 may force construction companies to seek new markets.

Zeybekci emphasized that sub-Saharan countries might be a good choice for investment during this transition period, and more investment could lead the market to become one of the most prominent markets in the region. He highlighted that the construction committee programs initiated in Ethiopia and Nigeria will continue to be improved in the near future as well. "We hereby congratulate the achievements of our construction sector, and I firmly believe we will witness many new achievements and progress in 2015," Zeybekci concluded.