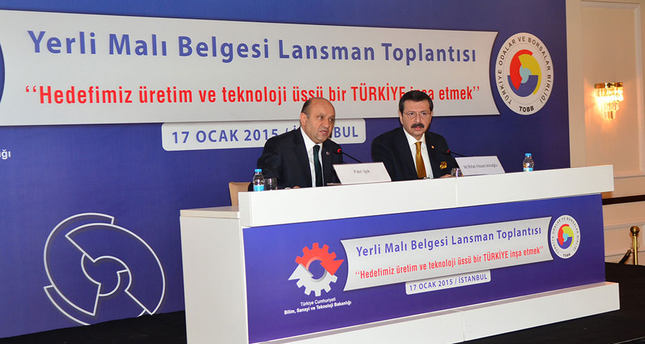 The government, together with the top business group TOBB, launched a cooperative venture to encourage domestic production, develop a manufacturing base and transform local SMEs into global brands

Any industrial product must have at least 51 percent local content to be considered a domestic good, said Union of Chambers and Commodity Exchanges of Turkey (TOBB) President Rıfat Hisarcıklıoğlu at the launch meeting for the Domestic Goods Certificate. The meeting was jointly held by the Science, Industry and Technology Ministry and the TOBB with the slogan, "Our goal is to build Turkey as a production and technology base."

According to Hisarcıklıoğlu, such an implementation would benefit small and medium sized enterprises (SMEs) and Turkish industrialists who have been waiting 18 years and complained that the public administration did not give priority and support to national enterprises in public tenders. Hisarcıklıoğlu noted that while a public institution is purchasing goods, it prefers domestic products regardless of how expensive they are and thus they contribute to the growth of national SMEs, which face great difficulties in reaching markets.

As a country, we have fallen behind in this field for quite a long while, said Hisarcıklıoğlu, adding that opting for foreign products in public procurements works to the benefit of foreign companies rather than national SMEs.

"We used to say in the past that if Anatolian SMEs continued like this, they would fail to become global companies in the future. Thus, we meant that Turkey would be dependent on imports in industry in the future, as it is today," stated Hisarcıklıoğlu. He underscored the role of SMEs in the Turkish economy, saying that SMEs carry out 59 percent of total exports, while they import merely 40 percent of goods. "This means SMEs are also the solution for closing the foreign trade deficit," he added.

Hisarcıklıoğlu noted that the decision to offer a 15 percent price advantage to domestic production in public tenders was enacted in 2002; however, it could not be put into practice due to various bureaucratic challenges. In this regard, the Prime Ministry issued notices three times, but this implementation could not work in 93 percent of public procurement tenders. To overcome this problem, we carried out this important study under the guidance of Science, Industry and Technology Minister Fikri Işık, noted Hisarcıklıoğlu.

The implementation will calculate at what rate a commodity is produced in Turkey and thus it will determine whether it is domestic or not. Any industrial production must have at least 51 percent local content to be considered a domestic good.

Within the scope of implementation, a manufacturing company will appoint a financial advisor and an expert who will calculate the percentage of local content in a product in line with the chart of accounts determined by the ministry. If this calculation undergoes technical and financial audits successfully, it will be approved. Then, a related chamber or stock market will check the legal and regulatory compliance of all information and documents. If they are found applicable, domestic goods certificate will be issued and delivered to the manufacturer.