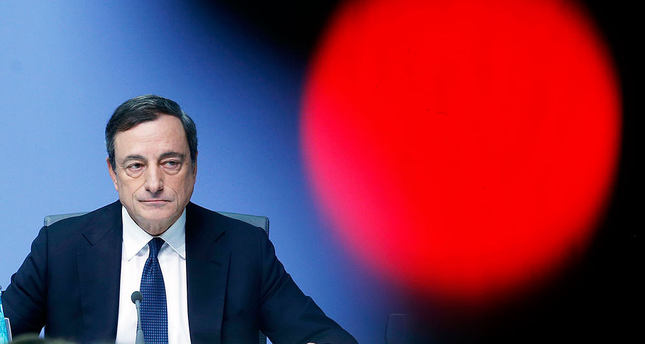 With area-wide inflation turning negative in December, the stage is set this week for the European Central Bank to unleash its biggest weapon yet in the battle against deflation in the eurozone, analysts say

Financial markets and European Central Bank watchers are betting that central bank Chief Mario Draghi will unveil a program of sovereign bond purchases known as quantitative easing (QE) at the first policy meeting of this year on Thursday.

With area-wide inflation turning negative in December -consumer prices fell by 0.2 percent across the single currency region -the alarm bells have been ringing, and Draghi and other top ECB officials have been busy priming the markets for action. Draghi said the bank had few other options at its disposal to counter the risk of deflation, a dangerous downward spiral of falling prices. And ECB executive board member Benoit Coeure said in multiple interviews that the central bank's governing council would debate the size of such a program this week. "The ECB will no doubt make good its promises and announce broad-based government bond purchases," said Commerzbank economist Michael Schubert. IHS Global Insight analyst Howard Archer agreed. The inflation numbers "sustain the massive pressure on the ECB to pull the QE trigger" on January 22, he said, even if it was "not 100 percent certain" that it would do so just yet.

QE is the biggest gun yet in the ECB's anti-deflation arsenal. The central bank has already cut its interest rates to new all-time lows, made unprecedented amounts of cheap loans available to banks via its LTRO and TLTRO programs, and embarked on asset purchase programs (ABSs and covered bonds) to pump liquidity into the financial system. But QE -a policy used by other central banks to stimulate their sluggish economies -has many critics in Europe, not least the German central bank, or Bundesbank. Bundesbank chief Jens Weidmann believes such a program takes the ECB outside its remit and is effectively a license to print money to get governments out of debt. Nevertheless, such objections received a setback last week when the top lawyer of the European Court of Justice said that the ECB's previous bond-buying program, Outright Monetary Transactions or OMTs, was in line with European treaties. For many, that was effectively a green light for a program of QE as well. Berenberg Bank economist Rob Wood said the experience of quantitative easing in the United States and Britain showed that such a program could work. "Central bank bond-buying can aid confidence, depress yields and spreads, boost asset prices, and lift growth," he said. Nevertheless, the eurozone was a more bank-based economy than the United States, and QE does not actually boost bank lending much, the analyst warned. "That, as well as distrust of the tool in core Europe, could cut the effectiveness of asset purchases in the eurozone relative to the U.S. and U.K.," he said. The real risk was not that QE failed to work, "but rather that the ECB does not do enough of it in deference to the hawks," Wood said.

However, many observers, including Draghi himself, insist that QE is not the be-all and end-all. "On its own, it (QE) can help correct only a near-term lack of demand," Wood said. UniCredit economist Marco Valli said that with tumbling oil prices putting significant downward pressure on headline inflation, a program of sovereign bond purchases "appears unavoidable, if only for a credibility reason". He suggested the program would include "at least 500 billion euros of government debt" and up to 250 billion euros of other non-financial corporate debt. "The timing of the announcement is a close call, but ECB rhetoric of the last few days suggests that the plan could be ready on Jan. 22," Valli concluded. Carsten Brzeski at ING DiBa said the ECB would "at least present a first outline of a QE program next week, even if it might save some details for the March meeting."