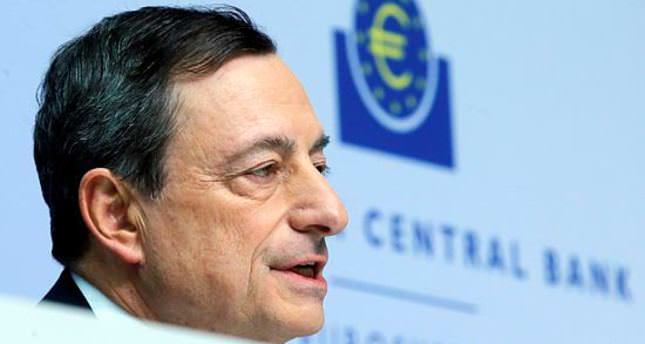 The European Central Bank took the ultimate policy leap yesterday, launching a government bond-buying programme which will pump hundreds of billions of new money into a sagging eurozone economy. The ECB said it would buy government bonds from this March until the end of September 2016 despite opposition from Germany's Bundesbank and concerns in Berlin that it could allow spendthrift countries to slacken economic reforms. Together with existing schemes to buy private debt and funnel hundreds of billions of euros in cheap loans to banks, the new quantitative easing programme will pump 60 billion euros a month into the economy, ECB President Mario Draghi said. By September next year, more than 1 trillion euros will have been created.

"The combined monthly purchases of public and private sector securities will amount to 60 billion euros," Draghi told a news conference. "They are intended to be carried out until end-September 2016 and will in any case be conducted until we see a sustained adjustment in the path of inflation." Bonds will be bought on the secondary market in proportion to the ECB's capital key, meaning the largest economies from Germany down will see more of their debt purchased by the ECB than smaller peers. The prospect of dramatic ECB action had already prompted the Swiss central bank to abandon its cap on the franc while Denmark, whose currency is pegged to the euro, was forced to cut interest rates in anticipation of the flood of money.

The Danish central bank intervened to weaken the crown ahead of the announcement. Former ECB policymaker Athanasios Orphanides said action was long overdue. "The ECB should have already embarked on QE," he said. "Now that the situation has deteriorated, the ECB will have to do much more." The euro fell, European shares jumped and bond yields in Italy, Spain and Portugal fell with the single currency dropping a full cent against the dollar to $1.1511. Draghi has had to balance the need for action to lift the eurozone economy out of its torpor against German concerns about risk-sharing and potentially being left to foot the bill.

Tensions broke out as the meeting got underway with French Finance Minister Michel Sapin firing a broadside at Berlin. "The Germans have taught us to respect the independence of the European Central Bank," he told France Info radio. "They must remember that themselves." A German lawyer who has been prominent in attempts to halt eurozone bailouts said he was already preparing a legal complaint against an ECB bond-buying programme.

Draghi said 20 percent of the asset purchases would be subject to risk-sharing, suggesting the bulk of any potential losses will fall on national central banks. Critics say that calls the eurozone concept of risk sharing into question and countries with already high debts could find themselves with further liabilities. Eurozone inflation turned negative last month, far below the ECB's target of close to but below 2 percent, raising fears of a Japan-style deflationary spiral. But there are doubts, and not only in Germany, over whether printing fresh money will work.

Most eurozone government bond yields are already at ultra-low levels while the euro has already dropped sharply against the dollar. Lower borrowing costs and a weaker currency could both help to boost growth but there is a question about how much downside there is for either. "It is a mistake to suppose that QE is a panacea in Europe or that it will be sufficient," former U.S. Treasury Secretary Larry Summers said at the World Economic Forum in Davos on Thursday. "There is every reason to expect that QE will be less impactful in a context like the present one in Europe than it was in the context of the United States."

A plunge in the price of oil has thrown central bankers into a spin worldwide. Canada cut the cost of borrowing out of the blue on Wednesday while two British rate setters at the Bank of England dropped calls for tighter monetary policy as inflation has evaporated. The ECB has already cut interest rates to record lows. Earlier, it left its main refinancing rate, which determines the cost of eurozone credit, at 0.05 percent. Greece and Cyprus, which remain under EU/IMF bailout programmes, will be eligible but subject to stricter conditions. "Some additional eligibility criteria will be applied in the case of countries under an EU/IMF adjustment programme," Draghi said. The move comes just three days before an election in Greece where anti-bailout opposition party Syriza is on track to gain roughly a third of the vote.