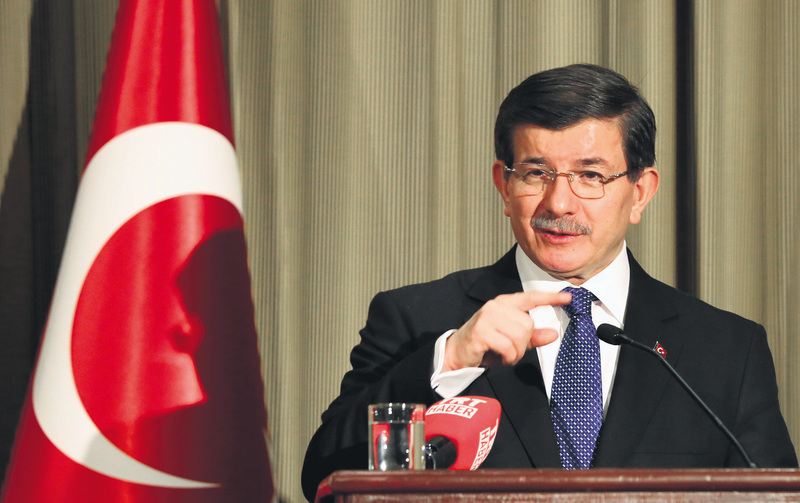 PM Davutoğlu’s efforts to promote Turkey’s economic growth and political stability received an enthusiastic response from top New York investors, who said they were reassured by the belief of the prime minister

Prime Minister Ahmet Davutoğlu's trip to the U.S. produced a warm welcome from top executives of investment companies, with most affirming their trust in the consistent growth and political stability of Turkey. Speaking after a meeting Davutoğlu held with a group of Goldman Sachs investors in New York late on Wednesday, John Waldron, co-head of the Investment Banking Division of Goldman Sachs, said their discussions were "very effective," and that there was a consensus among international investors that Turkey is an attractive target for investment. At the meeting, Davutoğlu described Turkey as a land of stability between the depressed European economies and violence-ridden Middle Eastern countries, and expounded the country's vision for the future and consistent economic growth.

People are generally pretty optimistic [about] Turkey," he told Anadolu Agency (AA) after the meeting. "The issue is not so much [about] Turkey, the issue is the countries and the region around Turkey. The bigger risk is not Turkey and Turkey's performance, it is more about what's happening in the neighborhood." He said Turkey has done "a terrific job" in terms of keeping its economy and policies strong during a tumultuous period in the region with many countries gripped by war and conflict. "It seems to me there are still big infrastructure opportunities in the country," Waldron said. "Mr. Prime Minister focused on continued investment in infrastructure. The start of an airport project is an example. There seems to be lots of opportunity in infrastructure investing." He also said the Goldman Sachs Group had recently opened an office in Turkey and this showed their confidence in Turkey's economy.

The closed-door meeting with Goldman Sachs investors was also attended by Deputy Prime Minister Ali Babacan, responsible for the economy. Sarvesh Srivastava, a principal with the Emerging Sovereign Group, told AA the meeting was "very useful," as it clarified certain points of concern in the eyes of investors. "I do feel somewhat reassured," he said, adding that investors put a lot of trust in the current economic leadership of the country. He said a major expectation of investors in Turkey is that the country "do more of the same things" it did over the last decade, which has brought a consistent growth rate of almost 5.5 percent since 2002. He said the finance sector in Turkey is particularly promising for investors. One of the Turkish businessmen who attended the meeting, Abdullah Kavukcu, said similar gatherings should be organized more often in the future to boost investor confidence. "Investors have very positive expectations about Turkey now," said Kavukcu, who is chairman of the board of Simit Sarayı, a popular pastry and tea chain specializing in one of Turkey's national snacks, known as "simit." He said Turkey's upcoming elections would bring good outcomes in terms of the economy, although elections generally scare off investors.

Davutoğlu also addressed representatives of Turkish-American associations in New York. "There are fragile countries like Syria, Iraq, Lebanon, Ukraine, Yemen and Libya around Turkey. When we look at all these, Turkey is an island of stability," he said. "Turkey is an island of stability with a vision for the future, and it has far more economic growth than the average country in the EU and OECD countries. Turkey is a promising country in terms of dynamism and political stability. Despite many problems, we have grown at an average of 5.5 percent over the past 12 years. Our national income has multiplied by three-and-a-half times [in nominal terms]. The value of our economy rose to $840-$850 billion from $230-$240 billion in 2002, when we came to power," he said.

After meeting with the top executives of several investing companies at the Ritz Hotel, Davutoğlu had dinner with Citibank institutional investors at the Citibank Executive Center. Babacan and Finance Minister Mehmet Şimşek also accompanied Davutoğlu at the dinner, which was closed to the press.

Davutoğlu said that none of the international financial institutions that he held talks with in the U.S. are concerned about Turkey's future prospects. He underscored that Istanbul will become a financial center in the world with new and ongoing infrastructure projects, including a new airport, a new Bosphorus bridge and new tunnels.