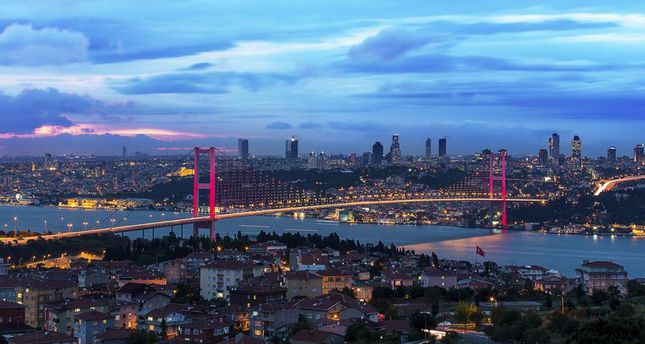 by Anadolu Agency Mar 07, 2015 12:00 am
Istanbul is boosting state income by bringing in nearly half of all tax revenues collected by the Treasury, according to figures released by the Ministry of Finance.

Istanbul single-handedly contributed a sweeping 46.07 percent of the entire state budget with some 185 billion lira ($71 billion at the current exchange rate) in 2014.

The province of Istanbul is also boosting the country's exports by providing nearly half of Turkey's foreign trade in 2014, according to the Turkish Exporters' Assembly.

The country´s capital city Ankara provided some 44 billion lira ($17 billion), a contribution of 11 percent of the state budget, for the Treasury.

A total of some 448.4 billion lira ($171 billion) was spent from the Central Administration Budget in the last year.

The Turkish government spent approximately 110 billion lira on its employees in the fiscal year 2014 alone ? a price tag that makes employee payments that year the government's largest expenditure. Nearly 50 billion lira have been spent on interest rate expenses in 2014.

The biggest share of the 2014 general budget was allocated to the National Education Ministry with $35.6 billion and the Ministry of Health came in second place with $33.5 billion.

The finance ministry estimated budget expenses for the 2015 fiscal year at 520.4 billion lira, while budget income for 2014 is estimated at 499.5 billion lira, resulting in a budget deficit of 20.9 billion lira.

The biggest share of the budget was allocated to the ministries of education and health with each getting $38 billion, $2.4 billion for education and $4.5 billion for health compared with 2014 figures.
Last Update: Mar 07, 2015 12:44 pm
RELATED TOPICS