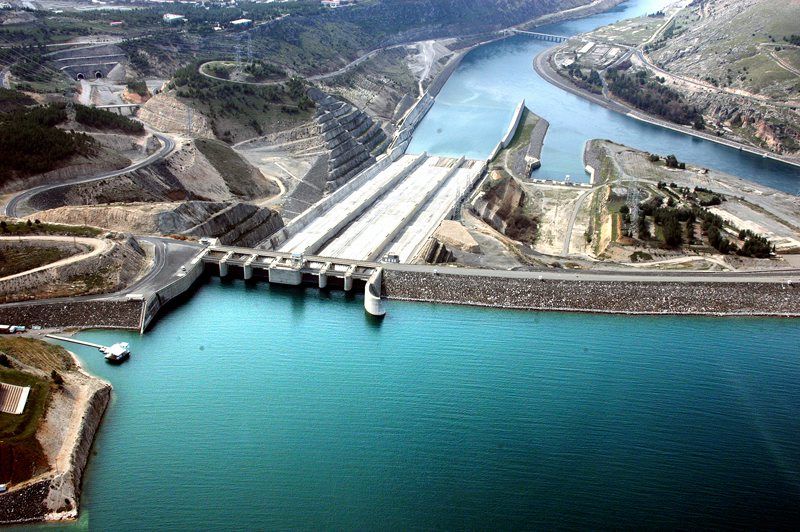 by Ali Ünal Mar 08, 2015 12:00 am
Prime Minister Ahmet Davutoğlu announced on Sunday evening in the southeastern province of Mardin the long-term action plan for the Southeastern Anatolia Project (GAP), which covers the 2014-2018 period. Speaking at the event along with seven ministers of his cabinet, Prime Minister Davutoğlu underlined that as part of the action plan, the government is expected to invest $10 billion, and by the time the action plan is completed in late 2018, the project will contribute $6.6 billion yearly to Turkey's economy. Its contributions are estimated to be $2.2 billion for irrigation, $4 billion for energy, and $410 million for drinking water. With this project, over 1 million people will be employed. While the hydroelectric power plants built in accordance with the project reached 7.476 MW of production, an annual amount of 27 billion kW is targeted. The second action plan, which includes the term 2014-2018, will speed up irrigation investments.

''In 2002, the total amount of budget dedicated to the GAP Project was only 5 percent. In our term, this was increased to 10.5 percent. We will continue to increase its budget. With the second action plan, we will invest TL 26.7 billion ($10 billion) to the project,'' Davutoğlu said, while adding that the GAP project aims to reduce unemployment to 10.3 percent and help raise the region's exports to around $22 billion by the end of 2018.

As part of the long-term Action Plan, an area of 1.1 million hectares will be opened to irrigation and around 5,000 small and 8,000-hectar fields will be planted, and erosion control practices will be implemented in an area of 40,000 hectares. Along with these, by the end of 2018, the rate of participation in the work force is estimated to be 39.1 percent, and the proportion of gross value added to Turkey's average is estimated to increase to 54.4 percent. Export is expected to increase to $22.1 billion.

Stating that the financial support to small-middle sized business will be increased, Davutoğlu added that a venture capital fund will be created for 43 cities that fall under the GAP Project, and added that medium-sized enterprises in the region will be offered funds to the tune of TL 58 million or $22 million.

Prime Minister Davutoğlu also revealed the five main pillars of the project as economic growth, social development, city planning, infrastructure development, and enhanced institutional capacity. There has been significant improvement in regional indicators in the fields of education and health. Moreover, the new action plan aims to boost these indicators up to national averages by introducing new education and health facilities, while responding to equipment and personnel needs of existing ones. Enrollment ratio in pre-school, primary and secondary education in the region is rising, and the number of students per classroom in primary and secondary education is shrinking. In line with this, the prime minister said that the project would build thousands of new classrooms to reduce the number of school children per class to 33.

The action plan was prepared by considering the demands and opinions from regional development agencies, in coordination with the Ministry of Development and the GAP Administration. The new action plan aims to speed up economic and socio-cultural development in the region, while also aiming to increase the competition power through humane and sustainable projects. It was added that these plans would also prioritize disadvantaged groups and areas, and will try to eliminate income inequalities.

The GAP project is an integrated socio-economic development project and is one of the largest of its kind in the world. It includes a water resources development program, which includes 22 dams, 19 hydropower plants and an irrigation network for 1.7 million hectares of land. The project does not only provide economic opportunities, but also enhances the socio-economic structure of the region.

From the point of view of the GAP Administration, the project is comprehensive and is not only about irrigation or hydropower production. "GAP is a regional development project with an international brand that aims at improving the income level and quality of life of the people living in the region by mobilizing resources in southeastern Anatolia, eliminating development disparities between this region and other regions of the country and thus contributing to the targets of economic growth and social stability at a national level," Head of GAP Administration Sadrettin Karahocagil told Daily Sabah.

According to Karahocagil, building adequate and quality infrastructure in the region is one of the determining factors in realizing economic transformation and accelerating social development. In this respect, the completion of irrigation infrastructure is the priority target of the new action plan. The project contributed immensely to the development of the region. With an increase in irrigation facilities, agricultural and industrial output developed in the region. Total exports from the region came to only $600 million in 2002, but this figure had reached $8.9 billion at the end of 2013. Turkey's total exports increased 42 percent from 2007 to 2014. In the same period, the total export increase of the GAP Region reached 170 percent.