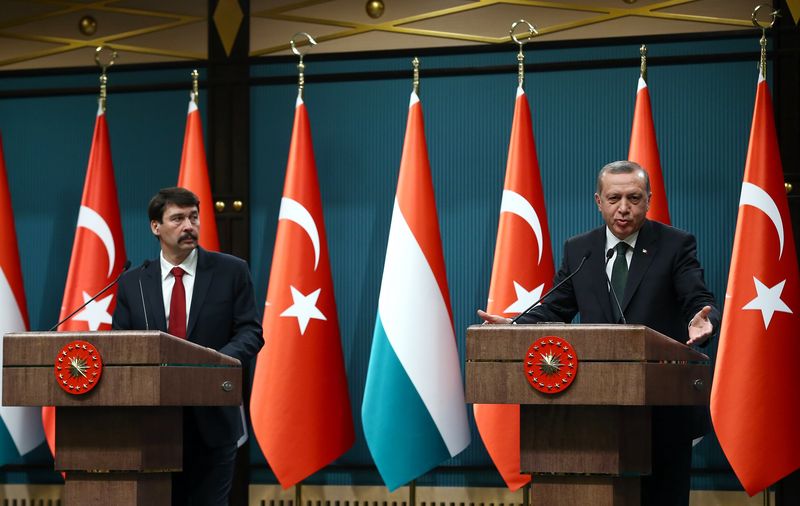 by Daily Sabah Mar 12, 2015 12:00 am
President Recep Tayyip Erdoğan and the Turkish Central Bank (CBRT) have overcame differences over the interest rate policy, Erdoğan announced on Thursday, a day after his meeting with the head of CBRT Erdem Başçı.

Speaking in a joint press conference with Hungarian counterpart Janos Alder in Ankara, Erdoğan said him and Başçı agreed over the Central Bank's policies to boost Turkish investments at yesterday's briefing.

On Wednesday, Başçı, reasserted the CBRT's main reference points regarding its interest policy in a briefing prepared for President Recep Tayyip Erdoğan.

Başçı attended the meeting with a 130-page presentation on restoring confidence in the economy and on limiting public debt in order to decrease interest rates. The report was published on CBRT's official website following the briefing.

A statement from the president's office after the meeting said: "At the Turkish president's meeting with Deputy Prime Minister Ali Babacan and Central Bank of the Republic of Turkey Governor Erdem Başçı, it was pointed out that the foundations of the economy in Turkey are solid. The meeting focused on the implementation of policies for strong and balanced growth. The president showed sensitivity to issues of interest rates and production."

The statement also said that economic stability must be preserved in line with Turkey's 2023 growth targets, when the country will mark its 100th anniversary. It was also noted that the recent economic developments were being closely observed in order to take the necessary precautions.