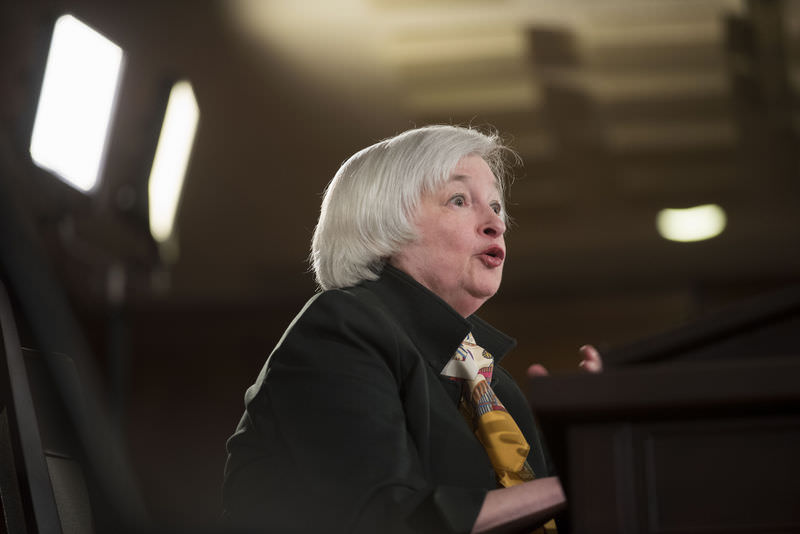 by Bloomberg Mar 27, 2015 12:00 am
Chair Janet Yellen said she expects the Federal Reserve to raise interest rates this year, and that subsequent increases will be gradual without following a predictable path.

"The actual path of policy will evolve as economic conditions evolve, and policy tightening could speed up, slow down, pause, or even reverse course depending on actual and expected developments in real activity and inflation," she said.

Policy makers last week opened the door to an interest-rate increase as soon as June, while also signaling they'll go slow once they get started. The benchmark federal funds rate has been kept near zero since December 2008.

Rates near zero helped cause a "sizable reduction" in labor market slack, and a modest rate increase is "highly unlikely" to halt that progress, Yellen said.

She said the gradual path of tightening is reflected in a new set of projections by Fed officials released on March 18. Officials cut their median estimate for the main rate at the end of 2015 to 0.625 percent, down from 1.125 percent projected in December.

Officials have ruled out a move at the next meeting in April. The next scheduled session after that will be in June.

The labor market is "likely to improve further in coming months," Yellen said. At the same time, progress on meeting the Fed's inflation goal has been "notably absent." Some of the weakness in inflation "likely reflects continuing slack" in labor markets.

Despite disappointing retail-sales data, she said consumer spending probably will "expand at a good clip this year given such robust fundamentals as strong employment gains, boosts to real incomes from lower energy prices, continued increases in household wealth, and a relatively high level of consumer confidence."

She was less encouraged by other parts of the economy. "Dollar appreciation appears to be restraining net exports, low oil prices are prompting a cutback in drilling activity, and the recovery in residential construction remains subdued," the Fed chief said.

The policy-setting FOMC dropped a pledge last week to remain "patient" in raising rates, instead saying they would wait until being "reasonably confident" inflation will move back to its 2 percent target.

Low inflation, stuck below the Fed's goal for almost three years, is one of the main reasons to wait before raising the policy rate. The Fed's preferred gauge of price pressures increased 0.2 percent in January from a year earlier.

Little price pressure is coming from wage gains, which remain slow despite the stronger labor market. Average hourly earnings rose 2 percent in February from a year ago, matching the average since the end of the recession in June 2009.

Cheaper oil also has cut inflation. Crude futures plunged from $107 in June to a six-year low of $42.03 last week.