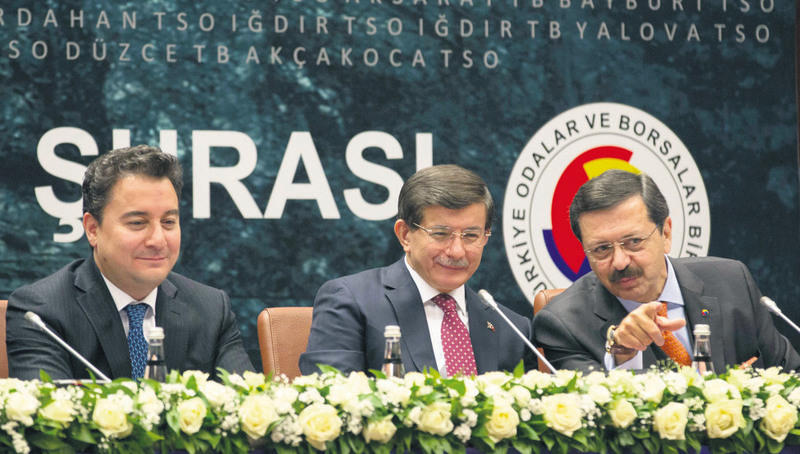 Prime Minister Ahmet Davutoğlu said election-oriented economic policy was a trap, and some parties try to apply such policies just to get votes. He stressed that the Justice and Development Party (AK Party) has never stooped to such politics. Speaking at the Trade and Industry Council meeting yesterday, which was organized by the Union of Chambers and Commodity Exchanges of Turkey, Davutoğlu said economic policies announced by all parties need to reflect economic realities.

"The political parties in the '90s had applied election-oriented economic policies just to get votes. However, the AK Party has never resorted to such tricks, as it was neither ethical nor just," Davutoğlu added during the meeting in which eight ministers accompanied him. He also stressed that the AK Party had always been aware that no matter what is promised, problems will always follow. Moreover, budget deficits will become the main problem despite what the party has promised during the elections.

He also announced that the AK Party will be revealing a nine year government program until 2023. And while they have given much good news, they have never sacrificed their discipline. Davutoğlu said the opposition parties have fallen into the trap of promising things that they cannot assure after the elections. Furthermore, he emphasized the AK Party is responsible and would not create any kind of financial deficit or insecurity about social security that might become major problems for leaders and officials in a post-AK Party government. "We do not have any desire to be the temporary ruling party. We want to rebuild Turkey, that is our desire," Davutoğlu said.

The prime minister said the AK Party government has increased incentives and support for research and development as well as design activities, and extended the indemnities supported by the Treasury. He also announced that they will eliminate all restrictions for pledging movable properties as securities. He noted that when you need to pledge something as a security in any kind of loan, the government will ensure that movable properties can also be pledged.

Davutoğlu announced that they have decreased the resource utilization support fund for forward imports of investments and intermediate goods from 6 percent to zero. This capital increase will ensure that resources that have been transferred abroad or capital that has been invested abroad will return to Turkey. He also stated that with the new incentive package, companies that increase their capital will be able to deduct a certain amount from the income of the company, which will ensure that idle capital will be re-injected into the economy. "This means that companies increasing their equity capital will have the chance to invest and to acquire more financing," Davutoğlu said.

Davutoğlu reiterated that 120,000 more people will be employed in order to increase the number of people working for the benefit of society, and that the decisions regarding employment subsidies have passed the legislative process.

"We prioritize those that implement any kind of new approach, new product or new technology. We will try to give any kind of support required for such entrepreneurs, since we don't want to be a country that only consumes technology, but one that also produces technology," Davutoğlu said. He added that if any more subsidies are required in R&D, the government will also try to provide such support, as such subsidies granted to investments in advanced technologies and R&D are crucial for Turkey's future.

According to the incentive package announced by the government last week, while investment contributions for expenses were between 0 percent and 80 percent, this will be increased to between 50 and 80 percent. Investments in advanced technologies will be deemed as priority investments and benefit from fifth region incentives. Incentives provided to cities included in the fifth region, such as Erzurum, Adıyaman and Kilis, to support production in strategic sectors have been extended to all regions that invest in advanced technologies. For example, companies investing in advanced technologies in İzmir will also benefit from customs tax exemption, value added tax exemption, employers' national insurance contribution support, investment location assignment and interest incentives - five points in loans in Turkish lira and two points in foreign exchange loans.
Last Update: Apr 09, 2015 12:33 pm
RELATED TOPICS