Minister: Regional economic unit for Iraq should be established 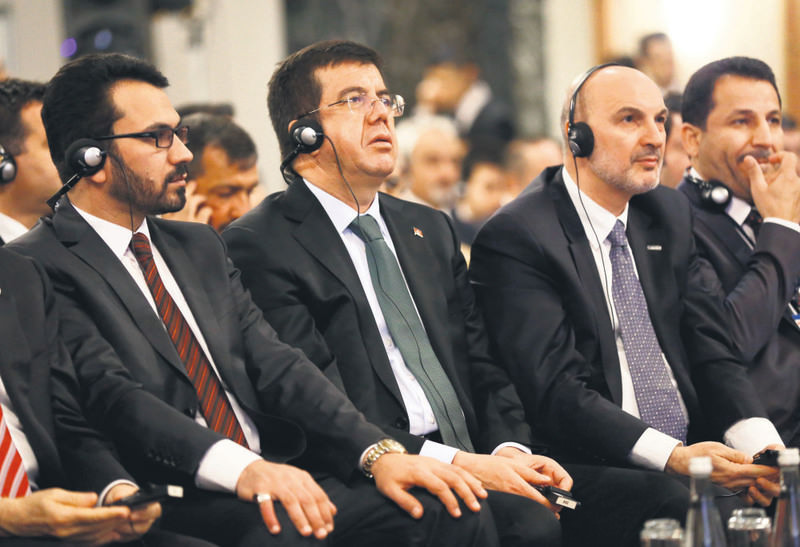 Economy Minister Zeybekci underlined the need of a new economic bloc including Iraq and other regional countries, while Iraqi Minister of Communications al-Esawi proposed an industrial zone for Turkish companies in Iraq

Economy Minister Nihat Zeybekci said that a new economic bloc for Iraq and its near vicinity should be formed where the most important players would be Iraq and Turkey. Speaking at the Investment Opportunities in Iraq conference held by the Ministry of Economy and Foreign Economic Relations Board (DEİK) on Friday, Zeybekci said that there are many fields Turkey and Iraq can collaborate in, and stated that together both countries have succeeded especially in urbanization and infrastructure.

Iraqi Minister of Industry and Mines, Naseer Kadhum al-Esawi, said that the Iraqi government is establishing large- and middle-scaled organized industrial zones, and offered to establish one for just Turkish companies in Iraq. He added that an area close to the ports in the southern part of Iraq might be assigned just for Turkish companies.

Welcoming Esawi's suggestion to establish a special economic zone for Turkey in Iraq, Zeybekci said that Turkey has started to play a crucial role on trade dynamics with the agreements signed and ongoing negotiations, such as preferential trade deals with different countries. Underlining the fact that Turkey has been signing free trade agreements and taking steps in economic integration in many places around the world, Zeybekci said that Iraq should be included in these steps as well. "Therefore, we would like to establish a special Turkish economic zone in Iraq, our sister country," Zeybekci said, adding that Turkey is devoted to improving economic, trade, educational and cultural relations. He underlined that Iraqi companies should have the same rights as Turkish companies in Turkey, and that Turkish companies should have the same status and rights as Iraqi companies in Iraq, which will be a win-win for both countries. He also said that Iraq is a new investment zone for Turkish companies, and once investors are assured, Turkish companies will immediately start production.

Zeybekci also said that increasing the capacities of borders and transportation and reviving railways are issues that need to be discussed, but what was of greatest priority is the signing of a transit transportation agreement between the two countries, as this will pave the way for mergers and joint ventures between Turkish and Iraqi companies. "While we do not have any similar agreements that allow trucks to freely operate in Turkey, we are willing to discuss it with Iraq," Zeybekci said. He also said that they want to bring together sector representatives either in Bagdad, Ankara or Istanbul, and then also support and encourage them to cooperate with the free trade and economic agreements. "We need to encourage Iraqi and Turkish companies to cooperate in other countries as well. We will support Iraq to become an essential member of the global economy," Zeybekci said.

Iraqi Minister of Communications Hassan Kadhim al-Rashed, also underlined the importance of historical relations between the two countries and invited Turkish companies to invest more in Iraq. He underlined that the Turkish private sector has many opportunities to invest in Iraq, especially with the new development projects implemented. He also said that while the drop in crude oil prices was a problem, Iraq has turned a new leaf and will not abandon these projects. He also noted that specialized companies may examine the Iraqi market and contribute in their related fields. "We need investments in infrastructure, road networks, fiber optic lines, etc. Turkey has specialized companies in these fields and hopefully they will want to invest in such fields required by Iraq," Rashed said.

Esavi said that while they have more than 100 public companies, such companies are currently setting up relations with the private sector as well. He noted that they sign agreements with all kinds of customers, and that they can offer various opportunities, especially human resources, to Turkish companies.

After the meeting, a cooperation agreement was signed between Aktif Bank and the Trade Bank of Iraq.