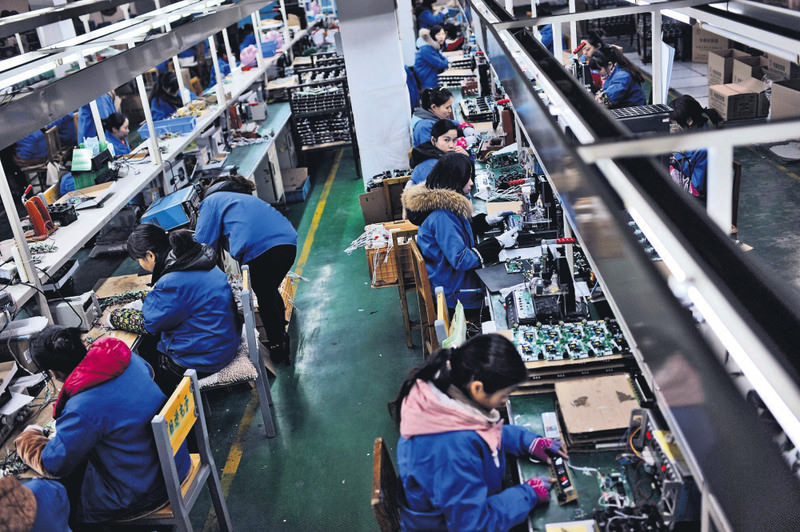 by Associated Press Apr 15, 2015 12:00 am
China's economic slump deepened as manufacturing and retail sales cooled in the first quarter of this year, stepping up pressure for Beijing to keep the world's second-largest economy on track. Growth declined to 7 percent from the previous quarter's 7.3 percent, official data showed yesterday. It was China's weakest performance since the global financial crisis, when growth tumbled to 6.1 percent in the first quarter of 2009. Much of China's decline has been self-imposed as communist leaders try to steer the economy to more sustainable growth based on domestic consumption instead of trade and investment. But an unexpectedly sharp downturn over the past year has fueled fears of job losses and social tensions. Beijing has cut interest rates twice since November and launched targeted measures to help exporters and other industries. Economists note China still depends on government-led spending on construction to drive growth. "We still are relying on a traditional growth engine, and that is declining," said a spokesman for the National Bureau of Statistics, Sheng Laiyun, at a news conference. "We are in transition between the old and new growth models." On Tuesday, the country's top economic official, Premier Li Keqiang, warned at a meeting with businesspeople and economists that China faces "downward pressure," according to a report on the Cabinet's website.

Li called for regulatory changes to nurture new industries, improve efficiency and generate jobs, the report said. It made no mention of possible short-term stimulus measures. "Slower growth should not be viewed as bad news if it means the economy is adjusting to a more sustainable path," said Andrew Colquhun of Fitch Ratings in a statement.

"But the adjustment needs support from consumption while the economy adapts to slower investment. It's sobering that the economy has become so reliant on construction and real estate to generate jobs." Total trade in the first quarter contracted by 6.3 percent from a year ago, making it unlikely the ruling Communist Party can meet its target of 6 percent growth for the year. March exports fell 15 percent. Growth in factory output slowed to 6.4 percent from December's 9.8 percent rate, according to Wednesday's data. Investment in real estate, factories and other fixed assets was 13.5 percent, down from last year's 15.7 percent expansion. Growth in retail sales slowed to 10.6 percent from 2014's full-year expansion of 12 percent. Even those weakening numbers might fail to give a true picture of the state of consumers' willingness to spend, because unlike in other countries, China's official retail data include purchases by the military and government agencies. This week, the World Bank trimmed its forecast for China's growth to 7 percent this year from 7.1 percent. Earlier, the International Monetary Fund cut its own outlook for China to 6.8 percent from 7.1 percent. Those rates are well above the low single-digit growth forecasts for the United States and Europe this year but less than half China's peak of 14.2 percent growth in 2007.
Last Update: Apr 15, 2015 9:17 pm
RELATED TOPICS