China and Pakistan cement ties with $46B trade deals 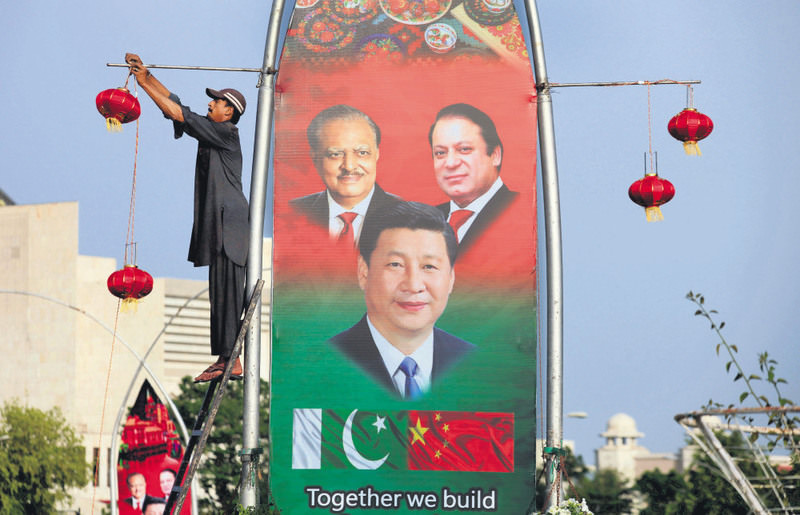 After more than six decades of a relationship focused on defence and security, China and Pakistan are also developing an economic partnership with trade and investment agreements worth $46 billion

Pakistan and China signed trade and investment deals worth 46 billion dollars to boost their economic relationship after years of security co-operation. The deals are part of China-Pakistan Economic Corridor (CPEC) project launched during the visit of Chinese President Xi Jinping who arrived in Islamabad on Monday on his first state visit.

The corridor is to be a complex network of highways, railways, investment zones and business centres, linking China's western Xinjiang autonomous region to Pakistan's Gwadar deep sea port in the south-western province of Balochistan.

Already built with Chinese assistance and operated by the Chinese government, the port on the Arabian Sea connects the country to key regions of Europe, Africa and the oil-rich Gulf. Minister for Planning Ahsan Iqbal said that the CPEC will transform the economic outlook of Pakistan. "I have said many times that it is a game-changer and an opportunity for people of Pakistan to change their fate through economic development," he said. Iqbal said it is a win-win deal and will also open up new avenues of development for China as "Gwadar is the shortest link for China to Europe, Africa and Middle East and will increase its outreach and competitiveness."

The CPEC will be completed by 2030 but s

ome short-term energy projects under the deal would be completed by end of 2018 to provide about 10,400 megwatts of electricity to energy-deficient Pakistan.

The economic corridor plan was first announced by Prime Minister Nawaz Sharif in 2013 after a visit by Chinese premier Li Keqiang. It was ready for agreement last year when a planned trip by Xi was cancelled due to mass protests by Pakistani opposition parties over alleged rigging of the 2013 elections.

Analyst Fida Khan said that CPEC is part of China's Silk Road strategy to increase regional connectivity and also counter the influence of US and its regional rival India. "The United States signed a nuclear deal with India and is also investing there to develop it for a role to counter China, which is investing in Pakistan to checkmate India in a classical way of politics," he said.

Pakistan and India have fought three wars since independence from Britain in 1947. India has also a border dispute with China and both went for brief war in 1962, in which China had the upper hand. Analyst Hasan Askari Rizvi said the economic corridor is an effort to change the geo-strategic ties of Pakistan and China into geo-economic relationship. "After getting a foothold at strategically located Gwadar, the Chinese will be in position to play more effective role in South Asia, Central Asia and Gulf," he said. "It will also connect China with the important Indian Ocean."

Defence analyst Talat Masood said that there were reports that China will also establish a refueling facility in Gwadar for its submarines and ships. "China is looking for both economic and strategic advantages through the economic corridor and massive investments in Pakistan," he said. Development Minister Iqbal said that Pakistan would have to change its sluggish working environment to keep pace with fast development practices of Chinese.

"We have to change and be quick to adopt their ways of working, otherwise they have options to investment in other neighbouring countries," he said.

Masood said that Pakistan's volatile security situation is a concern and any attack by militants at Chinese workers may slow down the implementation of projects. An official from the Interior Ministry told dpa that Pakistan was aware of Chinese concerns and concrete steps would be taken to address the security issues. "We are planning to raise a special force of about 12,000 personnel for protection of Chinese engineers and workers," he said.
Last Update: Apr 20, 2015 10:53 pm
RELATED TOPICS