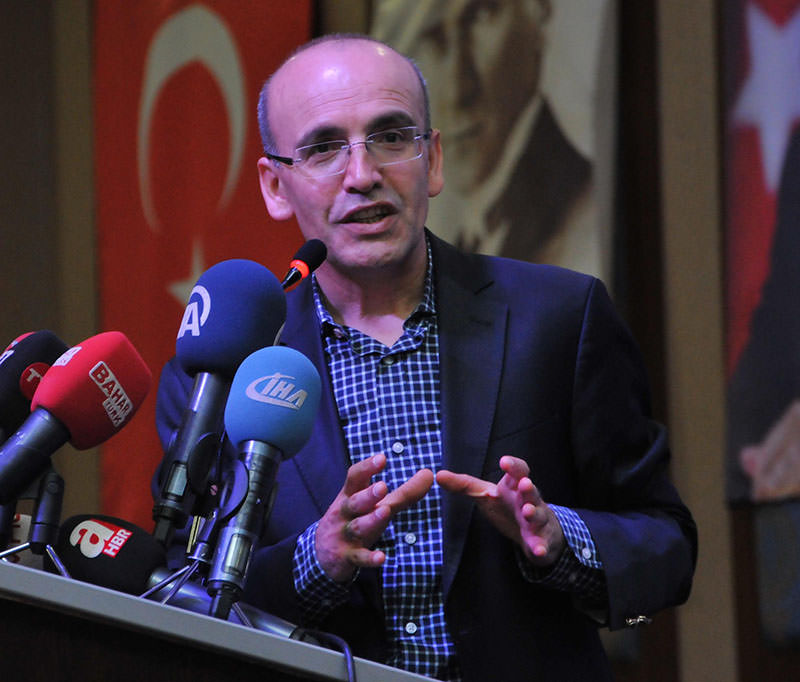 Claiming that the main opposition CHP's election promises ar unrealistic in terms of finance, Finance Minister Şimşek said that if they can prove the sources, he will vote for them

Finance Minister Mehmet Şimşek has said that if the main opposition Republican People's Party (CHP) could prove even one-third of the financial sources that it would use to realize its economic election promises, he will vote for the party.

Today, there are only seven weeks left before the general elections, and the parties have announced their election manifestos with their projections for the economy. The CHP's announcement has also captured the attention of the electorate with large economic promises. However, the ruling Justice and Development Party's (AK Party) finance minister believes that those promises will cost Turkey TL 149.5 billion ($55.2 billion), and are impossible to finance without losing the balance in the economy, considering the estimated budget deficit of TL 16 million for 2016. "If they can explain one-third of the financial resources to realize those promises, I would not only take my hat off to them, but also vote for the CHP," Şimşek said.

Appearing on a live broadcast on CNN Türk, Şimşek answered questions regarding topical issues. Continuing to refute the CHP's promises, Şimşek said that the additional cost of increasing the minimum pension to TL 1,500 would be TL 37.5 billion, pointing out that this figure doubles Turkey's current account deficit.

He said that the CHP deserves a Nobel Prize if it can explain how it will achieve these targets without exacerbating the current account deficit and dragging Turkey into a crisis. "We will neither deceive, nor will be deceived. We will not fall into the trap of populism," he added.

Explaining that the CHP has experienced parliamentarians coming from treasury and financial background, Şimşek asked whether they themselves believe in such populism. In response to the question of how the AK Party will form its Cabinet, Şimşek said that Prime Minister Ahmet Davutoğlu prefers to continue to work with the team that has completed its three-term tenure.

"Whether we take part in the Cabinet or not, we will strive for the actualization of truths on all platforms for the future of this country," he said, adding that a finance minister cannot ensure financial discipline without the support of the prime minister or the AK Party's founding chairman, Recep Tayyip Erdoğan.

"I wonder if they asked him," Şimşek said, referring to Kemal Derviş, a famous Turkish economist and currently vice president of the Brookings Institution. Derviş has been proposed to become a CHP candidate, assigned as prime minister if the party wins the election. However, Derviş refused to become a deputy and agreed to become minister from outside of Parliament.

In reference to the fact that the Turkish economy only grew by 2.9 percent last year, Şimşek said that this figure was better than those of many developing countries, and that it cannot be described as a crisis. According to Şimşek, the labor force participation rate is rising and 1.3 million individuals out of a total of 1.7 million have jobs. He said Turkey's current economic situation cannot be called a crisis while the real interest rate is ranging between 1 and 2 percent.

In response to a question of whether there is political oppression of the Central Bank, Şimşek said that the dollar-euro exchange rate dropped to 1.06 from the previous year's 1.30. Stressing that the dollar has gained an average value of 22 percent against all currencies in the world, including the euro, since last August, Şimşek underlined that the lira has undergone the same depreciation. He also stressed that this is not because of bad economic administration that fails to control the economy as some people claim, and that the same situation prevails in Brazil, South Africa, Russia and Kazakhstan.

Pointing out the fact that the rise of the dollar coincided with Turkey's debates over the Central Bank, he said that the situation was perceived by the public as if the government had put pressure on the bank. If there was not any contention experienced with the Central Bank, the lira would nevertheless still have lost its value regardless of what percent it might be, Şimşek said. He also added that there is no fluctuation in Turkey's market, but there has been slight uncertainty caused by the upcoming general elections over the past week. Şimşek concluded that it is not possible for the economy not to be affected by the Middle East's chaos and Europe and Russia's crises, as they are Turkey's largest export markets.
Last Update: Apr 21, 2015 12:28 pm
RELATED TOPICS