Erdoğan: G20 Antalya summit will be a milestone 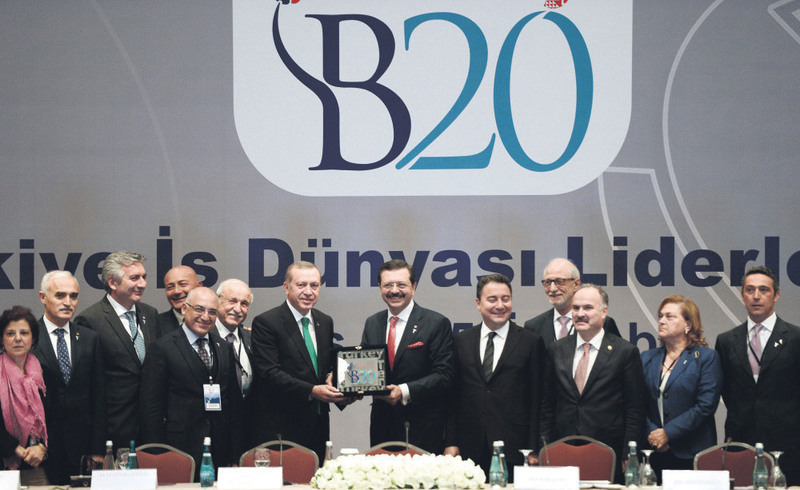 President Erdou011fan is presented a gift by B20 Chairman Hisarcikliou011flu during the Business World Leaders Forum in Istanbul on Friday.
by Daily Sabah May 08, 2015 12:00 am

With the outcomes of a year of progress, President Erdoğan said the G20 summit in November will be a milestone. Also, while economic ties have become stronger, the G20 provides the necessary platform for cooperation

The G20 summit, which will take place in Antalya on Nov. 15-16, will mark a milestone for the organization, and be different from previous summits, said President Recep Tayyip Erdoğan during his speech at the Business World Leaders Forum on Friday.

The forum was held in Istanbul after the G20 Agriculture Ministers Meeting and attended by business representatives from G20 countries under the chairmanship of Deputy Prime Minister Ali Babacan. Erdoğan also highlighted that the G20 has already established the necessary platforms for cooperation between countries while economic ties continue to become stronger.

Erdoğan emphasized the importance of the real sector for the global economy, and said the expectation from businessmen is to invest more. Pointing to the real sector as the only cure for global economic struggles, he said Turkey has always supported the real sector and will continue to promote it during the country's G20 presidency. Erdoğan also said it is essential for the business world to embrace the decisions taken by the political administration.

The chairman of the Turkish Chambers and Stock Exchanges (TOBB) and B20 Turkey, Rifat Hisarcıklıoğlu, said global problems can only be solved at the G20, adding, "We have an advantage to influence the global agenda this year with Turkey's presidency of the G20."

He stressed that Erdoğan, both as prime minister and president, has always supported the private sector and continuously strives to increase the global market share of Turkey's private sector. Hisarcıklıoğlu further emphasized that the Business World Leaders' Forum, which was shaped by Erdoğan's support, will be crucial within the next six months and will represent the Turkish business community at its best during the Antalya summit.

Trade is not increasing as we desired

Hisarcıklıoğlu said he very much values the G20 process this year and perceived the G20 as an effort to adjust to the new global environment, which faces many challenges. He indicated that stability has not been achieved within global growth for six years, and there is inequality between regions - adding that while the U.S. and Europe, which were in economic recession, are recovering, now developing countries are facing troubles.

Although trade is the driving power of global growth, Hisarcıklıoğlu said because its share is not increasing, it now instigates protective policies. Moreover, 4,436 protective measures were taken in 2014 alone, with 2,999 of these taken by G20 countries.

Touching on the high youth unemployment rates, he highlighted that there are countries where this figure is as high as 40 percent. Blaming the non-inclusive policies applied within the last 40 years, Hisarcıklıoğlu said inequality has evolved into a social problem from being just an economic problem. "Furthermore, I believe the lack of security and the clashes that are increasing around the world are closely related to inequality and non-inclusive policies," Hisarcıklıoğlu added.
Last Update: May 08, 2015 9:53 pm
RELATED TOPICS