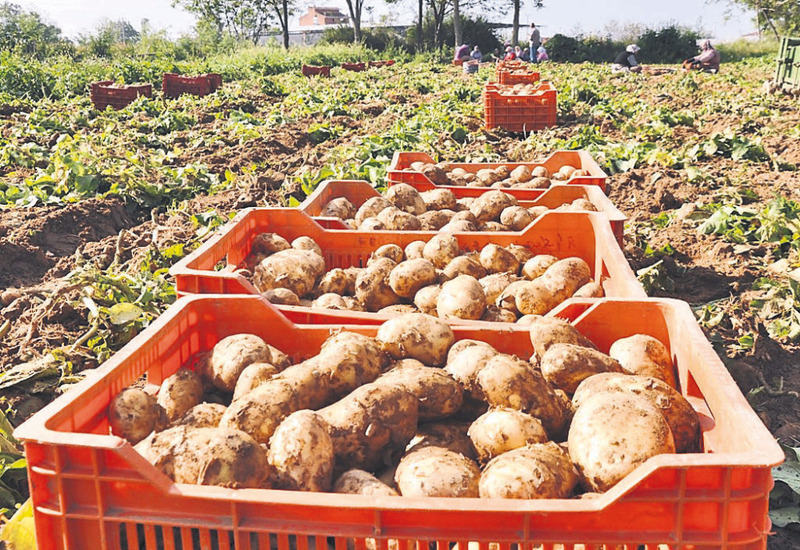 by Daily Sabah with Wires May 10, 2015 12:00 am
Potato prices reached a record high in Turkey equaling to TL 5 ($1.85) per kilogram. While the Customs and Trade Ministry investigates the possibility of a speculation, people live in the northeast find an interesting solution.

Potato prices increased 80 percent in four months, which raised the concerns over a speculation. Customs and Trade Minister Nurettin Canikli stated that if the potato prices have been increased by stocking up, there are serious sanctions to be imposed. The minister said while the amount of supply hasn't dropped and supply-demand balance is stable, prices should be maintained at a similar level to last year's prices. Canikli further added that this change in the price is not normal since all other conditions are same, which gives a chance to consider other possibilities.

Canikli stressed that the new agriculture season had opened and there was no logic to keep such high stocks of last season's crops: "Because stocks are reduced before new crops come out to the market. Normally when new crops come out, prices get lowered; however, we see there is still a huge stock of potatoes. Therefore, this is probably one of the basic reasons for the rising prices of the potato."

Stating that potato prices are falling thanks to the efforts of the ministry, Canikli said, "Downward movement in prices continues. Potato prices are falling and they will continue to fall because people related to the issue have to reduce their stocks upon seeing the determined steps taken by the government. It seems the prices have fallen to TL 2 so far. As the workings progress, we expect the prices to continue falling in the upcoming days. If there are some people who want to interrupt this, they should give up. There is no way that they can reach their goals. The figures are involved in the government records. That's why; they cannot achieve their goals and get results."

While the price of a kilogram of potatoes in Turkey has increased to TL 5, in Batumi, Georgia, which is just 40 kilometers away from Artvin, the Turkish city with a border to Georgia, potatoes are sold for TL 0.6 per kilogram, which triggers Turkish citizens to purchase their needs from Georgia.

The price of potatoes has been increasing rapidly within the last few days and has reached between TL 2.8 to TL 5 while the average price in Georgia is around TL 1, which means higher demand from Turkish consumers.

According to statements from fresh vegetable and fruit sellers in Batumi, the capital of the Autonomous Republic of Adjara in Georgia, while they used to purchase products from Turkey due to the recent price increases of which they are not aware of the reasons, they are now selling potatoes either produced in Batumi or imported from Ukraine. They also added that many of the Turkish tourists visiting the region return home by buying 5 to 10 kilograms of potatoes from the city as prices are tenfold cheaper than they are in Turkey.

It is possible to reach Batumi from Rize in the Black Sea Region by car. Fuel oil prices in Batumi are also almost half of what they are in Turkey and since no visa or visa fees are required, many Turkish citizens prefer to go to Georgia by just paying the TL 15 departure fee.
Last Update: May 10, 2015 10:06 pm
RELATED TOPICS