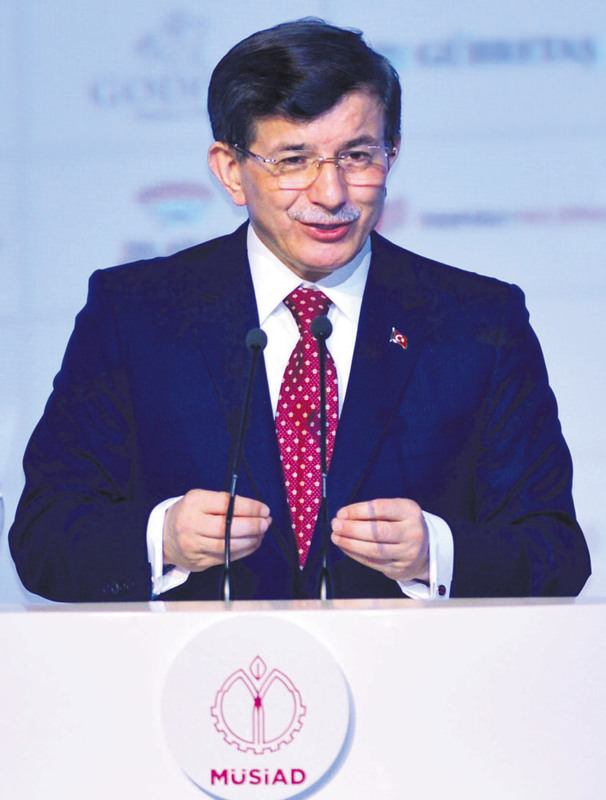 by Daily Sabah May 10, 2015 12:00 am
Prime Minister Ahmet Davutoğlu who attended the 25th anniversary reception of the Independent Industrialists and Businessmen's Association (MÜSİAD) in Istanbul on Saturday, said MÜSİAD was the first sign of the historic transformation of Turkey and added that in order for a country to be completely independent and severing, it has to be economically independent.

Davutoğlu said MÜSİAD's establishment was one of the most important steps taken at the best time possible. "Ideas emerging right on time shape associations and the future, they act as pioneers, and it is not just people or their ideas, but the associations and institutions they establish," he added. Davutoğlu said as an academic at that time, he was closely involved in MÜSİAD's establishment and was honored to be included in advisory committees. He added that the prototype they built based on chiefs, scholars and tradesmen has evolved ever since and such steps have been taken in this respect. He said he was writing articles on how important scientists and scholars are for both the Islamic world and humanity and it was the businessmen and market that would implement the morals set by scholars in the real world.

He also expressed how happy he was that all the executives at MÜSİAD are excited and motivated for the next 25 years and not tired from the past 25 years. "When the recent periods are considered, MÜSİAD has been the contract for social transformations, economic breakthroughs and global transformations," Davutoğlu said. Deeming self-confidence the most crucial revolution, Davutoğlu said that in the last 12 years MÜSİAD had turned a society that had lost all of its self-confidence and suffered a psychological blow in all respects to one that can endure any action or blow with self-confidence. He also thanked everyone who took part in this transformation and added that it is not merely a political transformation, but an economic and cultural success. He also underlined that within the coming months, there may be more challenges ahead and their aim is to read today's history correctly and base the future on this understanding. "In this respect, the 25 years of MÜSİAD is full of success as is the last 10 to 12 years of Turkey. In order for these accomplishments to be rewarded, security and stability should be established and the links between the business world, politics and the science world should be improved.

He also indicated that despite the global economic recession, Turkey is continuing its economic development and that the dynamism of the business world is always appreciated.

According to the latest economic data, industrial production has grown by 4.7 percent and automobile sales boomed by 57 percent in the last four months. Davutoğlu said that both welfare and production in Turkey are blooming despite the global economy.

He also said that a cash flow of $532 million into the Turkish stock exchange in April indicates that Turkey is still successful in terms of financial cash while the global recession continues.

"I want to give the message that despite all depressing scenarios, we need to emphasize that a brighter future is waiting for us," Davutoğlu added, and said MÜSİAD's 25th anniversary should remind us of past successes, teach us to learn from our mistakes, improve a common approach and plan the next 25 years. He added that despite all obstacles and challenges, Turkey will reinforce its economy. MÜSİAD presented its new logo and corporate identity for the 25th year's anniversary during the reception.
Last Update: May 10, 2015 9:46 pm
RELATED TOPICS