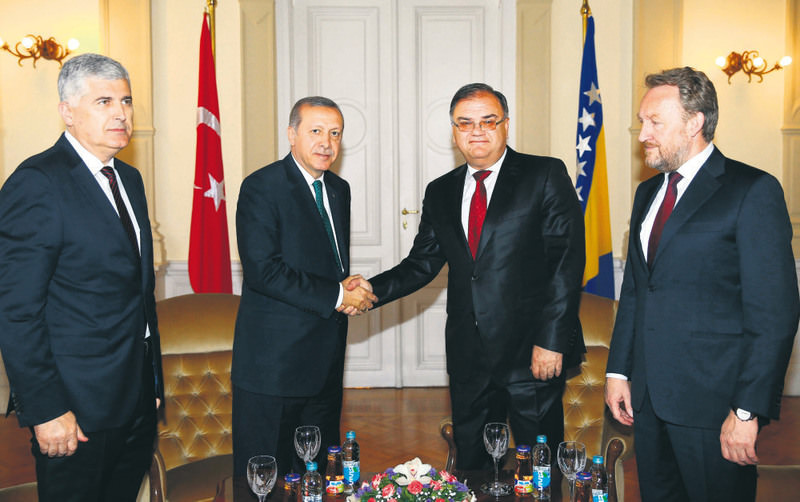 Several commercial deals aiming to further boost bilateral trade were signed during President Erdoğan's visit to Bosnia on Wednesday. The president, who was accompanied by dozens of ministers and businessmen, also held key meetings on energy and construction

President Recep Tayyip Erdoğan on Wednesday paid an official visit to Sarajevo with a delegation of businessmen, which he called "a new leap for economic ties" between Turkey and Bosnia-Herzegovina (BiH). During his visit, a new deal was signed by Turkey's state-owned Ziraat Bank's BiH branch, which will offer 50 million euros in credit to Bosnia-Herzegovina's small- and medium-sized enterprises. It was said that the main purpose of the loan is to ensure that entrepreneurs and tradesmen in the country have easy access to resources and development. Ziraat Bank's loan program will be offered for investments, increasing employment and production, economic development and the agriculture, tourism and construction industries in Bosnia-Herzegovina. The loan's interest rate is 2.9 percent for 12 months, 3.49 percent for 13 months to 60 months and 3.99 percent for 61 months to 120 months. Members of the Presidency of Bosnia-Herzegovina, including Serbian member and Chaiman Mladen Ivanic, Bosnian member Bakir Izetbegovic and Croatian member Dragan Covic, held a meeting with Erdoğan in the building of the Presidency of Bosnia-Herzegovina, which was followed by a joint press conference with Erdoğan and Ivanic.

At the press conference, Ivanic referred to Erdoğan as someone "who knows Bosnia-Herzegovina well and has important investments in Bosnia-Herzegovina," and said he was happy to welcome Erdoğan. He added that Turkish associations have realized various crucial projects in Bosnia-Herzegovina. According to Ivanic, they discussed economic relations and investment facilities between the two countries in the meeting, and Ivanic emphasized the discussions were "very good and friendly." He said there were no disagreements or conflicts between the two countries, and that Turkey and Bosnia-Herzegovina have especially agreed to fight against terrorism together. Before the press conference began, the country's Ministries of Foreign Affairs signed a memorandum of understanding regarding information technologies and a cooperation agreement regarding veterinary medicine. Cooperation agreements regarding international travel of passengers and goods via highways and one regarding science and technology were also signed between the two governments.

DEİK's Energy Business Council's chairman, Süreyya Yücel Özden, said due to its geographic location, BiH may serve as an expansion point for Turkish businessmen wanting to enter the European market. Underlining that BiH is an attractive zone for hydroelectric energy investments, Özden said along with the renovation projects of the 16 plants in the country, investors of both countries may cooperate on building new plants and selling electricity to certain European countries. "Furthermore, even selling electricity to Turkey may be considered, since such purchases would be a beneficial import for Turkey," Özden added.

According to the FTA signed between Turkey and BiH, all customs taxes and taxes with equivalent effects applied to exports are waived and there are no non-tariff barriers and taxes on imports, which may cause trouble for Turkish exporters.

During Erdoğan's official visit, energy cooperation has been discussed, addressing BiH's electricity demands and also electricity exports to its neighbors such as Croatia and Slovenia. There are currently 16 hydroelectric plants in Neretva, Trebisnjica, Drina, Vrbas and other locations, and the current hydroelectric potential of Bosnia-Herzegovina is more than 6,000 megawatts.

Moreover, the country's approximate lignite reserves are around 2.3 billion tons. BiH also has strong potential in wind power, and the bio-energy, raw material resources of BiH are estimated to be around 1.5 million cubic meters. A Bosnian member of the BiH Presidency Council, Bakir İzzetbegovic, had said last week that there are many clean rivers with high flow rates that can be used for energy plants in the country, along with coal mines, wood and many other metal and mineral resources that can be explored. He had also said that further investments made by Turkish businessmen in BiH are of the utmost importance.