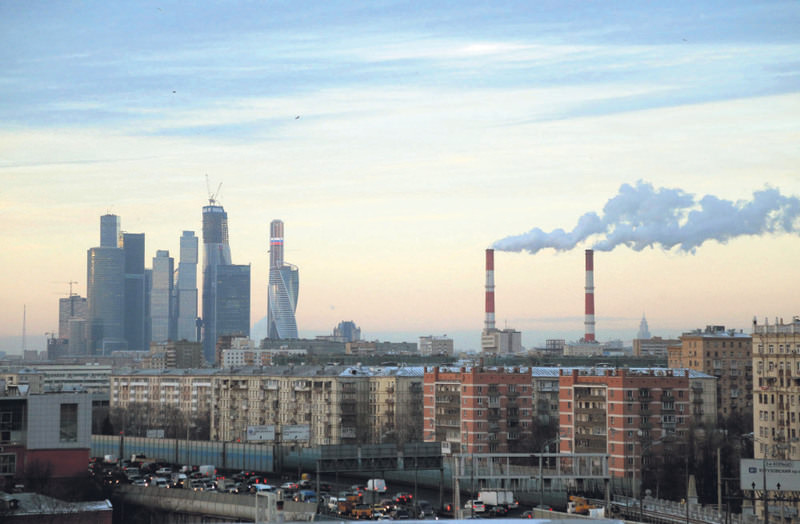 A view of the Moscow international business center with some under-construction skyscrapers. Russian economy gains strength after suffering from western sanctions and falling oil prices.
by Anadolu Agency May 22, 2015 12:00 am

After suffering from Western sanctions, which have cost the country $100 billion, the Russian economy has rebounded. The Russian stock market's major index gained 25 percent of its value back while the ruble is rising against the dollar

Western sanctions appear to have had no long-term effects on the Russian economy, which despite expectations to the contrary continues to grow, according to official data and independent analysts. Sanctions, which targeted Russia's energy and financial sectors, initially helped drive the Russian economy into a contraction, along with the low price of oil.

Russian Prime Minister Dmitry Medvedev told the press last month that the sanctions had cost Russia $100 billion. "Sanctions are perfectly set up not to work at all, but to make a political statement," David Bonderman, head of the U.S. private equity firm TPG, which invested $100 million in Russia, said in a speech at a Los Angeles conference on April 21.

There is greater optimism on growth prospects for 2015, said Craig Botham, an emerging markets economist at Schroders in London, in a note published Thursday.

Russian Finance Minister Anton Siluanov said that the Russian economy would contract by 2.5 percent this year, less than what had been officially forecast in April, according to comments posted on the ministry's official Twitter account late Thursday. The third quarter would see the lowest level of growth, Siluanov added.

The International Monetary Fund (IMF) also sees better-than expected growth for Russia in the coming two years, according to a report published Thursday. Russia's Gross Domestic Product was negative 1.9 percent in the first quarter, and was expected to decline by 3 to 4 percent more in 2015, but then bounce back into growth in 2016, the report said.

The Russian ruble, which had dropped to about 80 against the U.S. dollar in December, is now back to about 50 to the dollar. Also, the major index on the Russian stock market has increased 25 percent in value since the new year. "The real sector of the Russian economy now seems to be relatively stable. Manufacturing grew due to an extensive rise in military procurement, at around 20 percent per year. Agriculture benefited from a good harvest and the food industry was buoyed by the food import embargo imposed by Russian authorities in August.

"Despite the decline in oil prices and other commodities, Russian producers have not reduced their exports and, thus, physical volumes of production have not suffered. Moreover, the Russian oil industry produced a record high 10.67 million barrels per day [bpd] in December, and set a new record of 10.71 million bpd in March," wrote Brookings Institute analyst Sergey Aleksashenko in a note published May 15.

Inflation is also expected to fall to 12.5 percent by year-end, according to the IMF report. "Due to the authorities' policy response and higher oil prices, growth should resume in 2016, while inflation is expected to decline further to single digits in that year," the report added.

The IMF praised the central bank and the financial authorities for their successful management of the economic crisis. "The authorities' use of regulatory forbearance and public support has been successful in stabilizing the banking system. The forbearance strategy was appropriately combined with intensified supervision," the report said.

Reaction by foreign investors has been swift. The Market Vectors Russia exchange-traded fund, which tracks the Russian economy, has jumped 41.5 percent since January, making it the best-performing emerging market fund this year. "Returns tend to be better in places where either the troops are in the street, or the prices are low," Bonderman said during the Milken Global Conference in Los Angeles. "If you're a mid-to-long term investor, the Russian market has some attractions to it," he added.
Last Update: May 22, 2015 11:36 pm
RELATED TOPICS