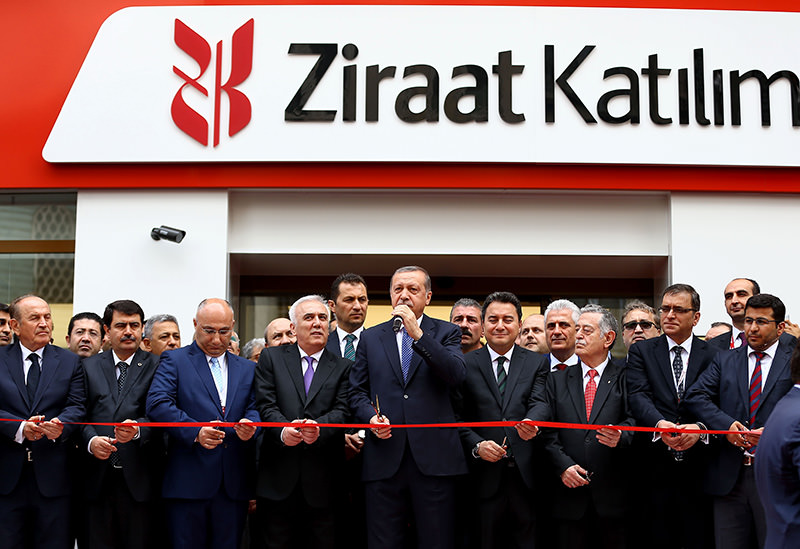 | AA Photo
by Daily Sabah with AA May 29, 2015 12:00 am
Ziraat Participation Bank officially began operating as Turkey's first state-owned participation bank on Friday with a ceremony attended by President Recep Tayyip Erdoğan. After Vakıf Bank and Halk Bank's endeavors to turn into participation banks are completed, there will be seven banks operating with this model.

After completing the necessary preparations, Ziraat Participation Bank started to operate on Friday. The new bank, headquartered in Istanbul, will operate in the first phase from its head office in Eminönü on the historical peninsula. Established with contributions of nearly 150 personnel, the bank is expected to reach 400 personnel and 20 branches by the end of this year.

Experts say that capital markets in Turkey will function more effectively with the increasing effect of participation banks paving the way for innovation in the capital markets. Emphasizing that interest-free business models of participation banks will develop investments based on partnership, experts also say that returns gained from profits as opposed to interests will contribute to the business law between lenders and borrowers.

Shares of participation banks are expected to increase with the entrance of public banks into the market with projections of shares reaching 15 percent to 20 percent by 2023.

In a speech at the opening ceremony of Ziraat Participation Bank, Deputy Prime Minister Ali Babacan, who is responsible for the economy, said that they aim to open 170 branches and employ 2,200 people at the new participation bank by the end of 2018.

Speaking at the ceremony, Erdoğan spoke of the ongoing work on the Istanbul Finance Center project and asked why if London is one of the most important centers of interest-free banking, why Istanbul should not also be one of these centers.

As seen in the whole world, idle resources that have been kept away from banking system because of interest rate sensitivity, have been mobilized by participation banks in Turkey. This process was initiated by Albaraka Türk in 1984 and continued with Faysal Finans entering the sector in 1985. Another Gulf-origin bank, Kuveyt Türk, also gained a place in the participation banking sector in 1989, forming a capital partnership with the Directorate General of Foundations. Asya Finans also entered the sector in 1996. Later, Faysal Finans turned into Family Finans and in 2005 it merged with Anadolu Finans, which entered the sector in 1991 forming Türkiye Finans.

Private financial institutions were declared participation banks in accordance with the banking law no. 5411 that was published in the Official Gazette on Nov. 1, 2005. At present, there are four participation banks operating in Turkey – Albaraka Türk, Asya Katılım, Kuveyt Türk and Türkiye Finans. Around 17,000 individuals are employed in 990 participation bank branches as of the end of 2014.

Participation banking in the world

With 40 years of history, around 1,000 companies are operating in the global interest-free finance system, whose assets reached $1.8 trillion by the end of last year. It is predicted that in the upcoming period it will achieve a volume of $3 trillion with double-digit growth in the short run. Global Islamic banking, which has a share of around 1 percent in the assets of global commercial banking, is expected to increase its share to 32 percent with double-digit growth rates.

Malaysia takes the lead among countries that are the driving force behind Islamic banking in the world. Bahrain, Kuwait, Oman, Qatar, Saudi Arabia and the United Arab Emirates (UAE) also stand out in interest-free banking. The total share of Turkey, Malaysia, Indonesia, Qatar, Saudi Arabia and the UAE in global Islamic banking system is around 82 percent.

Sukuk, which is defined as lease certificates, is the primary product triggering the development of the interest-free banking system in the world. Sukuk has become one of the most important instruments in the interest-free financial system with fast development recently. While global sukuk issuance was around $150 billion at the end of 2014, Malaysia was well ahead of the sukuk issuance of other countries.

As sukuk is used by multi-national companies for the purpose of long-term funding, international banks such as Societe Generale, Bank of Tokyo-Mitsubishi UFJ and Goldman Sachs also have their place in the sukuk market, showing that Islamic financial products have a potential not only in developing countries, but in developed countries as well. The U.K., for example, became the first country to enter the sukuk market from outside of the Organization of Islamic Cooperation, making sukuk issuance valued at 200 million pounds ($305 million) last year. Additionally, Hong Kong made sukuk issuances valued at $1 million while South Africa and Luxembourg made sukuk issuances valued at $500 million and 200 million euros, respectively. Goldman Sachs became the first conventional bank in the U.S. to enter the sukuk market with its sukuk issuance valued at $500 million last year.

In Turkey, the first sukuk issuance was made by Kuveyt Türk in 2010. The Undersecretariat of the Treasury issued sukuk valued at $1.5 billion for the first time in 2012. As of 2014, the amount of sukuk in the market was around $8 billion. Sukuk is one of the most significant instruments for the financing of infrastructure investments permissible in Islam.
Last Update: May 30, 2015 11:16 am
RELATED TOPICS