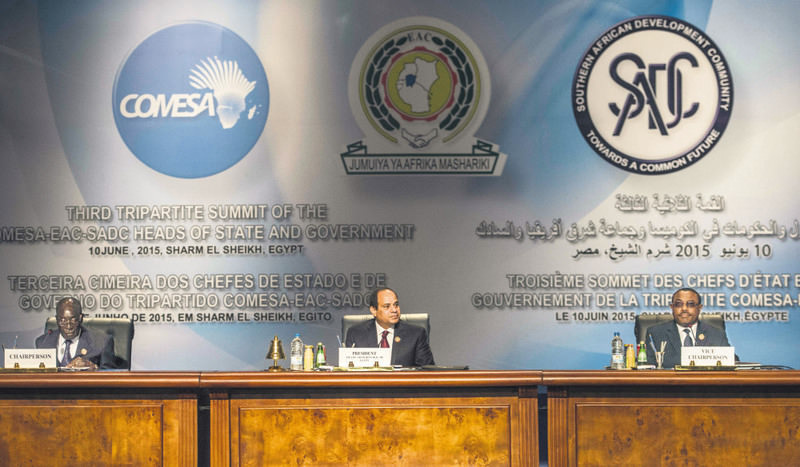 African leaders signed a potentially historic 26-nation free trade pact on Wednesday to create a common market spanning half the continent from Cairo to Cape Town. The deal on the Tripartite Free Trade Area (TFTA) caps five years of negotiations to set up a framework for preferential tariffs easing the movement of goods in an area home to 625 million people.

Analysts say the pact could have an enormous impact for African economies, which still only account for about 2 percent of global trade despite growth. But hurdles remain, with the timeline for lowering trade barriers yet to be worked out and the deal needing ratification in national parliaments within two years. The TFTA pact was signed by Egyptian President Abdel-Fattah el-Sissi, Zimbabwean President Robert Mugabe, Ethiopian Prime Minister Hailemariam Desalegn, Kenyan Deputy President William Ruto, Tanzanian Vice President Mohamed Bilal and other officials at a summit hosted by in the Egyptian Red Sea resort of Sharm el-Sheikh where negotiators finished drafting the deal this week. "What we are doing today represents a very important step in the history of Africa's regional integration," el-Sissi said as he opened the summit.

Addressing the summit, World Bank President Jim Yong Kim said the TFTA would allow Africa "to make tremendous progress and move the entire continent forward." He added, "Africa has made it clear that it is open for business.

The deal will integrate three existing trade blocs - the East African Community, the Southern African Development Community and the Common Market for Eastern and Southern Africa (COMESA) - whose countries have a combined gross domestic product (GDP) of more than $1 trillion.

"The geographical area covers Cape [Town] to Cairo ... the agreement paves the way for a continental free trade area that will combine the three biggest regional communities," Desalegn said.

Mugabe said the deal will create a "borderless economy" that would rank 13th in the world in terms of GDP.

Members of the three blocs range from relatively developed economies such as South Africa and Egypt to countries like Angola, Ethiopia and Mozambique, which are seen as having huge growth potential.

Negotiators said the final agreement had addressed concerns such as the management of trade disputes and protection for small manufacturers once the TFTA comes into force. Officials also said the agreement envisions the eventual merger of the three blocs. "The ultimate goal is to ensure easy movement of goods in these countries without duties," said Peter Kiguta, director general of the East African Community.

The TFTA has been widely welcomed by world business leaders, with experts highlighting that only 12 percent of Africa's trade is between countries on the continent.

The United Nations Conference on Trade and Development said in 2013 that if Africa is to boost its intracontinental trade, it must focus on creating "more space for the private sector to play an active role." Analysts say that although the continent's growth over the past 15 years outstripped global GDP expansion by nearly three percentage points, falling commodity prices, power shortages, political instability and corruption are still holding back its economies. Egypt's Minister of Industry and Trade, Mounir Fakhry Abdel Nour, told AFP the TFTA will help Africa boost trade and attract investments while also building infrastructure and production capacities. "Egypt itself expects to export about $5 billion worth of goods over the next five years [to TFTA countries]," he said. Officials said companies would benefit from an improved and harmonized trade regime, which would reduce the cost of doing business by eliminating overlapping trade rules. "What we have realized is that having one trade regime is better than multiple, costly trade regimes," said COMESA Secretary General Sindiso Ngwenya, who led the negotiations among the three blocs.
Last Update: Jun 11, 2015 12:18 am
RELATED TOPICS