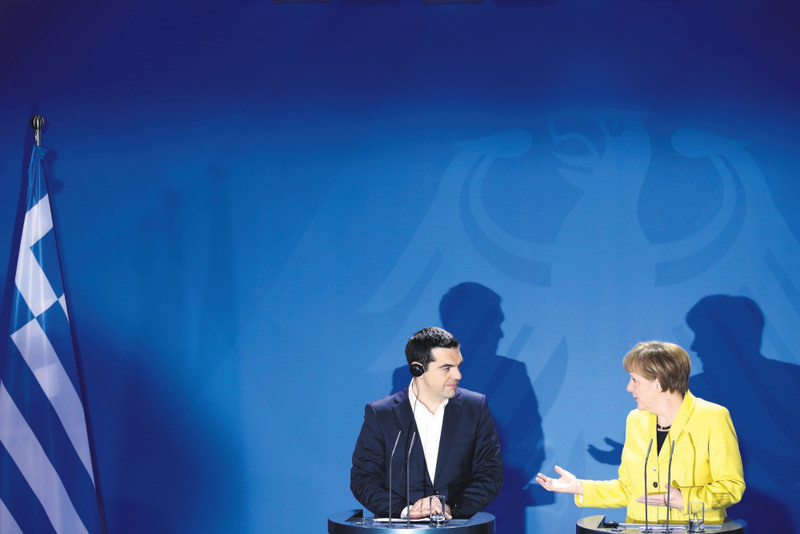 by Associated Press Jun 10, 2015 12:00 am
Greece has made new proposals aimed at ending a long standoff with international bailout creditors and unlocking vitally needed rescue funds, officials in Athens and Brussels said yesterday. An official in the radical left-led government said the suggestions were submitted Monday to the European Union's economic and monetary affairs chief, Pierre Moscovici, in Brussels. He said the documents included alternative ideas on budget measures required for creditors to approve the bailout payment, and proposals on "a workable plan" to render Greece's crushing debt load viable. No further details were made public.

The submission follows last week's impasse, when bailout creditors responded to a 47-page Greek proposal with a brief counter-offer that Athens rejected as containing "absurd" measures that would worsen the lot of Greeks already reeling from five years of deep cuts and soaring unemployment.

The two sides mainly disagree on creditors' demands for Athens to raise the sales tax on food, medicine and power bills, labor market reforms and cuts to pensions. These would be extremely hard for the new government to implement less than five months after its election on a combative anti-austerity platform.

A deal must be struck before the end of June, when Greece's bailout program ends and the pending 7.2 billion euro payment ($8 billion) will no longer be available. Without the cash, Greece will be unable to pay its creditors, and would default on its loans.

Greece has already said it is to bundle its four June debt repayments to the International Monetary Fund totaling 1.6 billion euros ($1.8 billion) into one on June 30. Though that's allowed under IMF rules, the move may be more a sign of defiance than absolute penury.

While Greece should still be able to pay pensions and salaries, and keep the essential functions of state running through tax revenues, a default would likely kill its banks. The banks depend on emergency funding from the European Central Bank, but in the case of a government default, the state-backed guarantees they give the ECB as collateral for the emergency funding would become worthless.

The import-reliant country could then have to put limits on money transfers and withdrawals and see shortages of basic goods. It could even have to ditch the euro as it adopts a devalued version of its old drachma currency to get liquid currency back into the banks and economy. The price of vital imported goods would likely rocket under the new, weaker currency.

A spokesman for the European Commission which together with the ECB and the IMF oversees the rescue program said Moscovici met a Greek government delegation Monday "to exchange views on the situation." "We continue to be in discussion with the Greek authorities," Margaritis Schinas told a briefing in Brussels. "Diverse proposals are being circulated including new suggestions which were received earlier this morning ... The three institutions are currently assessing these suggestions with diligence and care."

Schinas said that "if the conditions are there, there is always the possibility" that Greek Prime Minister Alexis Tsipras could hold a new meeting Wednesday with Commission head Jean-Claude Juncker on the sidelines of an EU/Latin America summit in Brussels.

At the summit, Tsipras is also expected to meet again with German Chancellor Angela Merkel and French President Francois Hollande. Hopes of progress helped Greek stocks buck the negative trend in Europe, with the main Athens index up 1.6 percent against the overall European trend.

Greece has depended on international rescue loans since 2010 when it was unable to finance itself by borrowing from financial markets. In exchange for loans, it had to implement big spending cuts and tax hikes. That prescription helped tame the country's budget deficits but worsened the economic situation the Greek economy shrank by a quarter while unemployment skyrocketed to a high of 28 percent. Failure to agree a deal with creditors on new reforms and cuts has left the country without rescue loans since last summer Greece has managed to survive through its own resources since but that's unlikely to last for long.
RELATED TOPICS