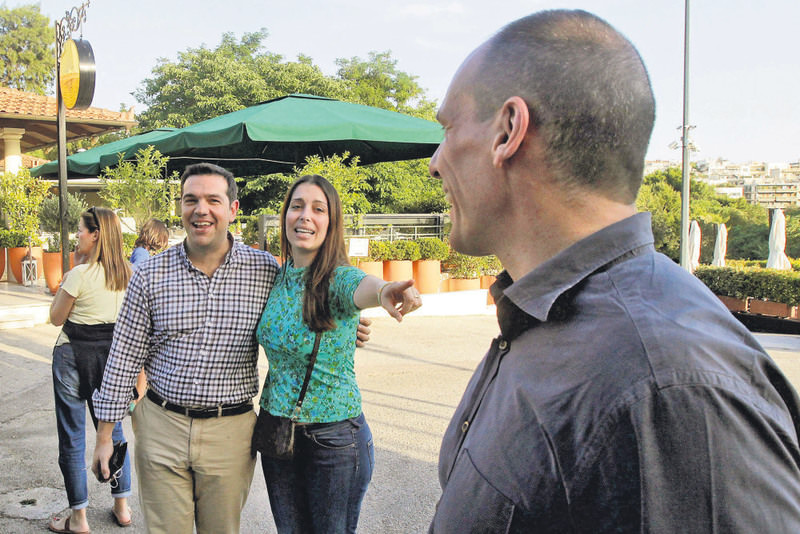 A young woman interrupts the walk of PM Tsipras (L) and Minister of Finance Yanis Varoufakis (R) to take a photograph with them in a park in central Athens.
by Jun 14, 2015 12:00 am

Cash-starved Greece is under huge pressure to strike an agreement to unlock vital bailout funds in the coming days, if not hours, after top eurozone officials turned the screws Friday and said they were preparing the ground for an Athens default.

Greek premier Alexis Tsipras envoys brought his latest bid to end a five-month standoff with the EU and IMF, who are demanding tough reforms in exchange for giving Athens 7.2 billion euros ($8.1 billion) still remaining in its international rescue package. "If we arrive at a viable accord, even if it is a difficult compromise, we will take up the challenge because our only criteria is to get out of the crisis," Tsipras was quoted as telling Greek officials late Friday in a government statement. Whatever needs to be done "needs to be done quickly," deputy finance minister Dimitris Mardas told Skai TV in Athens. He predicted there would be a deal.

A European source close to the negotiations told AFP that the meeting was "underway" with its resolution "open-ended," and it would possibly take several days.

Across the table from the Greeks were the three institutions responsible for overseeing their bailout, the second since 2010: the EU's Commission, the European Central Bank and the International Monetary Fund. The latter are the most pro-austerity of Greece's creditors.

A German media report said "tensions" had arisen between the European Commission and the IMF in recent days.

Citing a "negotiator" as its source, the Frankfurter Allgemeine Zeitung said in its Sunday edition that the IMF had "torpedoed" a recent attempt by EC President Jean-Claude Juncker to offer Athens a compromise deal. The proposal would reportedly have allowed Athens to postpone some 400 million euros in pension cuts in return for making similar savings on military spending.

The urgency for a deal increased exponentially on Friday when Europe's top economic officials said they had for the first time ever discussed the prospects of Athens defaulting on its debts.

"In discussions, a default was mentioned as one of the scenarios that can happen when everything goes wrong," a eurozone official told AFP on condition of anonymity after talks in Bratislava Friday. The bombshell came a day after the IMF said it pulled its technical team from Brussels because it was dissatisfied with the state of the negotiations.

The Athens stock market crashed 6 percent when news of the contingency plans emerged, and fears are high that markets could tumble further next week without signs of progress over the weekend.

The long-running saga over Greece's refusal to agree on reforms demanded by its creditors is set to come to a head at a meeting of eurozone finance ministers in Luxembourg on Thursday. A deal to unlock the last payout of Greece's international bailout is needed by then to give national parliaments time to approve it before the bailout expires on June 30. Also on June 30, Greece faces a huge 1.6 billion euro payment to the IMF and a further 3.4 billion euros to the European Central Bank on July 20. Talk of a 'plan B' if Athens should miss payments has been a huge taboo among Greece's eurozone partners and the switching of gears is the first real sign that they are willing to walk away from the table.

No specifics are known on what such a plan would look like, but on the Greek side Athens could see the introduction of capital controls, closure of banks, and the government issuing IOUs to keep the public sector financially viable. Asked if he thought the Europeans were bluffing, Greek Finance Minister Yanis Varoufakis said: "I hope they are." "I don't believe that any sensible European bureaucrat or politician will go down that road (of a Greek default)," the outspoken Varoufakis told BBC radio.

These drastic measures would also pave the way for an exit by Greece from the euro, but officials are for now ruling out that possibility. All efforts are on a "resolution of the Greek crisis" within the current program, a German finance ministry spokesman said on Saturday. Key to the negotiation is two red lines that the Greek government has refused to cross since it came to power in January on a promise to end austerity: no to further pension reform as well as to a demand to increase VAT on electricity.
Last Update: Jun 14, 2015 11:20 pm
RELATED TOPICS