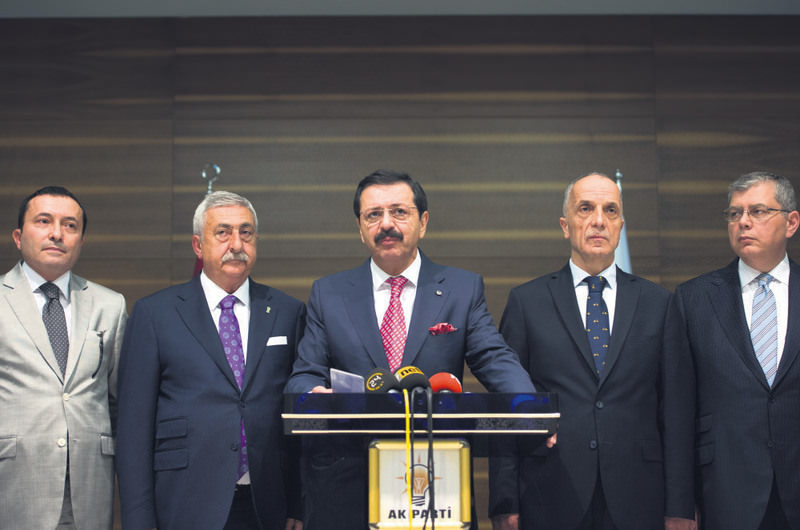 Turkey's top business communities are holding talks with political party leaders to discuss coalition government options and asking for a model focusing on economic development. The June 7 general election results enabled four different political parties to enter Parliament, while also making it impossible to establish a single-party government. This had a shocking effect on markets. The day after the elections, the Borsa Istanbul stock exchange lost value and the dollar reached a record high against the Turkish lira. Some international credit rating agencies voiced their concerns over the economy, stating the results increase political uncertainty and tensions may emerge regarding economic policy. Thanks to a strong fiscal system, the markets have calmed down and are currently following a cautious trend. However, the Turkish lira is struggling to regain its value and was traded at 2.75 against the dollar yesterday.

Turkish Union of Chambers and Commodity Exchanges (TOBB) managers visited the prime minister and the Justice and Development Party (AK Party) leader Ahmet Davutoğlu yesterday to discuss the election results. After the meeting, TOBB head Rifat Hisarciklioğlu said the election results were a call for conciliation. "We are in the same boat," Hisarciklioğlu said, adding a government should be formed as soon as possible whose focus should be on structural reforms to provide sustainable growth.

Turkey's two leading business groups, the Turkish Industry and Business Association (TÜSİAD) and the Independent Industrialists' and Businessmen's Association (MÜSİAD), scheduled meetings this week with political leaders as well. MÜSİAD met with President Recep Tayyip Erdoğan before meeting with the leaders of the country's major political parties. TÜSİAD will not meet with Erdoğan, but the meeting to be held today is going to be the first meeting with Davutoğlu since the group's earlier tension with Erdoğan over the group's point of contact. In December, former TÜSİAD Chairman Haluk Dinçer said Erdoğan is the head of state and they don't see him as the group's point of contact. "TÜSİAD sees the prime minister as its point of contact," Dinçer said, but his words were not welcomed. Erdoğan announced that he will not be attending TÜSİAD's events anymore since he is not seen as a point of contact. After this dispute, Davutoğlu decided not to attend TÜSİAD's general assembly in January. So, today's meeting is expected to ease the tension between Davutoğlu and TÜSİAD.

The TÜSİAD delegation began its series of political meetings yesterday with a meeting with main opposition Republican People's Party (CHP) Chairman Kemal Kılıçdaroğlu. "We are here to convey our demand for a new government to be established as soon as possible through consensus and collaboration. We are not here to form a government," said TÜSİAD head Başaran -Symes after the meeting - an important message since TÜSİAD was criticized in the past for its political influence. Symes stressed that the business world focuses on sustainable growth and they wanted to share their expectations of the new government with the leaders. TÜSİAD also held a meeting with Nationalist Movement Party (MHP) leader Devlet Bahçeli yesterday and will meet with Davutoğlu today. The co-chair of the pro-Kurdish Peoples' Democratic Party (HDP), Selahattin Demirtaş, refused to meet with the TÜSİAD delegation. "As the co-chairs of the HDP, Demirtaş and [Figen] Yüksekdağ, will be out of Ankara [at the time], we plan to visit them in the coming days," TÜSİAD said.After meeting with Erdoğan on Monday, MÜSİAD head Nail Olpak said they informed the president about their members' opinions and the business world's expectations. Olpak underscored that they wanted to meet with Erdoğan since he will have an active role during the government formation process. The MÜSİAD delegation will meet with Davutoğlu, Kılıçdaroğlu and Demirtaş, whom was claimed to be out of city and rejected to meet TÜSİAD, today and also requested appointment from Bahçeli. Additionally, MÜSİAD released a written statement emphasizing foreign capital interest - one of the positive effects of the country's successful economic performance - should be maintained, and called everyone to act responsibly to prevent political uncertainty from damaging the perception that Turkey is a safe and stable country for investing.
Last Update: Jun 16, 2015 10:35 pm
RELATED TOPICS