European ministers need to make ‘one last push' for Greece 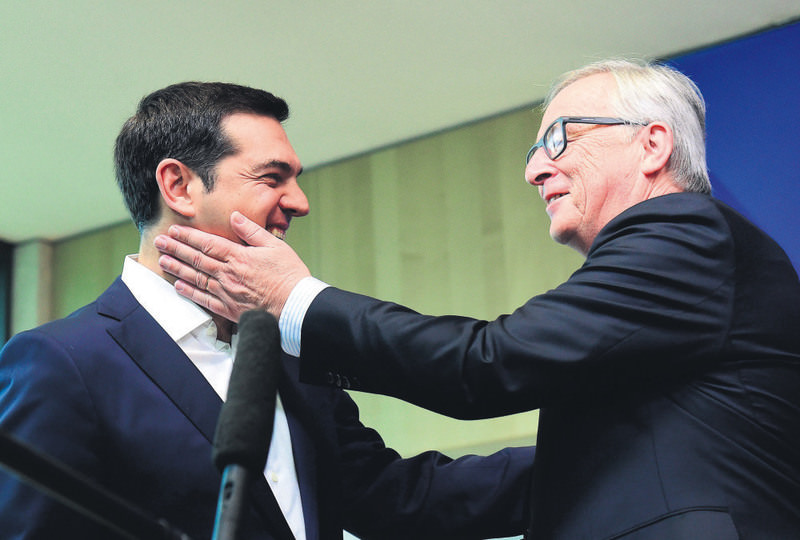 Greek Prime Minister Alexis Tsipras (L) is welcomed with a friendly pat by European Commission President Jean-Claude Juncker ahead of an emergency leaders' summit on Greece at the European Commission in Brussels on Monday.
by Daily Sabah with Wires Jun 23, 2015 12:00 am

A European leaders' emergeny summit will pave the way for an agreement between Greece and its creditors with a proposed reform package. However, the same package may cause trouble for radical left Syriza party at home

After a series of meetings in Brussels on Monday, international creditors said the new proposals submitted by the Syriza-led Greek government offered a good basis to break a four-month deadlock and reach an agreement this week. Ministers needed to make "one last push" to finalize the deal, French Finance Minister Michel Sapin said yesterday. Eurozone finance ministers are due to meet again this evening ahead of a European leaders' summit that starts tomorrow. Sapin also said Greece had made new proposals and that there were encaouraging signs. "These are tangible elements we can work with in an efficient way to reach an agreement," he said.

"Now we have to finish the work, verify the figures, verify the measures. We need one last push (Wednesday) night so that the heads of state can sign off on the agreement. That is the time frame that seems most reasonable and that we can achieve." On the other hand, Greece's economic reforms plan includes "harsh" measures the government would not have proposed had it had a choice, a spokesman said yesterday. The country this week offered a series of measures, including multiple tax increases, to persuade its creditors to release bailout funds and keep the country from defaulting on its debts as soon as next week.

The creditors, which include other eurozone countries, the European Central Bank and the International Monetary Fund, have demanded reforms that aim to make Greece's public finances sustainable and keep the country from slipping back into the bad habits of overspending that led it into its financial crisis. But Athens has argued they are needlessly harsh for the broader economy, which has shrunk by a quarter in the last five years and seen unemployment rocket to 25 percent.

The IMF sounded less optimistic, with its head, Christine Lagarde, saying Monday night that the suggestions were "still short of everything that we expected." U.S.-based credit rating agency Standard & Poor's chief credit rating authority Moritz Kraemer has said coming to terms with Greece would not imply the end of the story. Commenting on the ongoing negotiations regarding Greece during a seminar in London, Kraemer said he predicts Greece will remain within the eurozone and in the European Union until the end of the year.

Hopes that a deal was at hand boosted markets for a second day. The Stoxx 50 index of European shares was up 1.4 percent, adding to the previous day's big gains of 4.1 percent. In Athens, the stock exchange was up 4.5 percent in early afternoon trading, after closing up 9 percent yesterday.

Greece's proposal includes up to 8 billion euros worth of measures, including increases to consumer taxes, extra taxes on individual incomes of more than 50,000 euros per year and more taxes on companies. "There is full comprehension that there are measures in the proposal that are harsh, and they are measures that under different circumstances, if it was up to us there was no way we would have taken," government spokesman Gabriel Sakellaridis told private Greek television station Antenna.

Prime Minister Alexis Tsipras' radical left Syriza party won January elections on promises of repealing the harsh austerity measures successive governments have imposed in return for bailouts worth 240 billion euros since May 2010. But with creditors withholding the final 7.2 billion in rescue loans and state coffers running dry in Greece, Tsipras has been forced to backtrack on many pledges in the hope of securing a deal that will prevent a default on Greece's debts and a messy exit from Europe's joint currency. Greece faces a 1.6 billion euro repayment to the IMF on June 30, which it cannot afford.

Sakellaridis noted that the proposed measures seek to increase taxes on those with higher incomes rather than on low-income families, salaried employees and pensioners.

But Tsipras might face problems getting all of the government's lawmakers, which include members of a smaller nationalist party, to sign off on the deal when it is brought to parliament. Despite possible losses from the governing coalition, the deal is likely to pass with votes in favor from opposition parties.

Still, significant dissent from within government ranks would be a blow to Tsipras and is likely to lead to early elections. "Each person will assume their own responsibilities" during a vote, Sakellaridis said. "Clearly a government that doesn't have the confidence of its deputies can't stand up. But I don't think we'll get to this point," the spokesman said, adding that "the only choice in this case would be a recourse to the polls and to the Greek people."
Last Update: Jun 23, 2015 7:46 pm
RELATED TOPICS