Greece, creditors stick to their guns as debt deadline looms 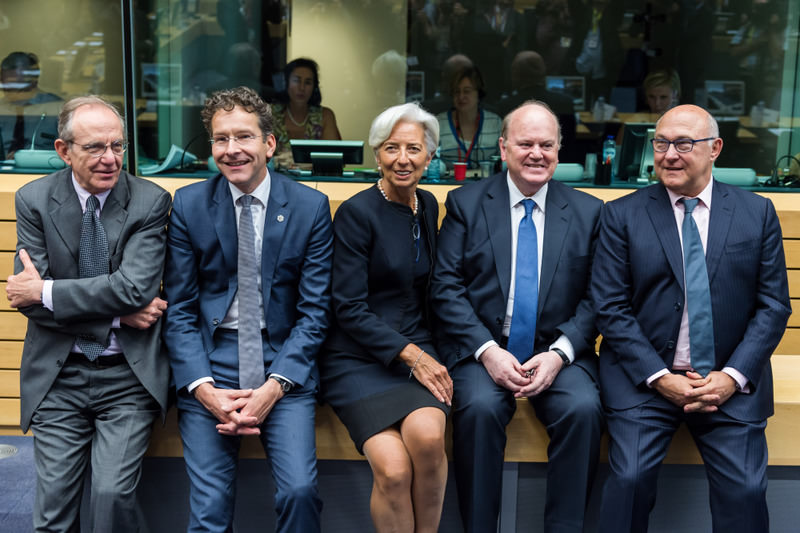 With talks in Brussels at an impasse, leaders from the International Monetary Fund, the European Central Bank and the European Commission raised the stakes by putting forward their joint position on the kind of reforms they would accept to offer Greece a financial lifeline. But Greece was still not on board, raising fresh doubts about whether it is possible to clinch a deal before Tuesday, when the country has to make a debt repayment it cannot afford.

"We don't have an agreement on the Greeks from that," said Jeroen Dijsselbloem, as he arrived to chair the second emergency meeting of the 19-nation eurozone finance ministers this week. "We will have to hear ... from the Greek side what their ideas are, what they could agree to, what they could not agree to."

An EU official, who declined to be named with the negotiations still in flux, said that the creditor offer "can form the basis of an agreement." But a Greek government official said that Athens remains "steadfast in support of the proposals" the country had made earlier in the week.

Greece's most influential creditor, Germany, was not optimistic about a breakthrough Thursday. The Greek government so far has "not moved, rather moved backward, and so I am not very confident for our meeting today," said German Finance Minister Wolfgang Schaeuble as he arrived for the eurozone meeting. He said nothing new is on the table and added that "there is a bigger difference rather than a coming together." Schaeuble insisted that "the decision lies exclusively with those responsible in Greece."

The latest gambit came after Prime Minister Alexis Tsipras met with the lenders under pressure to seal a deal before facing other European Union leaders at a summit. Tsipras is also under massive pressure from Greeks themselves as the compromises suggested so far will mean fresh hardship for citizens already suffering the impact of past austerity measures to bring public spending into line.

According to Greek officials at the talks, creditors are seeking a different mix of austerity measures than those proposed by Athens, making the cuts more immediate. They include broad pension cuts, higher revenue from sales tax, and a faster elimination of tax exemptions demands that are likely to fuel dissent within the government if accepted.

Representatives from almost every Greek party were in Brussels, following developments blow by blow, to see whether they would be able to back any new deal in the Greek parliament, where a vote must pass by Monday. "We are at a critical moment," Greek Labor Minister Panos Skourletis warned on private Antenna television. "There are issues that for us are paramount that must be included in an agreement. These are tackling the debt so that it can go on a sustainable course, and the financing of the economy," he said. A senior lawmaker in Tsipras' radical left governing party, Nikos Filis, denounced the international demands for new spending cuts as "blackmail."

Greece has a 1.6 billion-euro ($1.8 billion) debt to pay on Tuesday which it cannot afford unless the creditors unfreeze 7.2 billion euros (8.1 billion dollars) in bailout money. A failure to reach agreement with its creditors and a default on its debts could force Greece out of the eurozone, which would be hugely painful for the country. Some experts say it could be manageable for Europe and the world economy, but that remains unclear and any failure would likely shake global markets.

Amid the uncertainty over Greece's future, bank deposit holders have been pulling money out of the banks. That has forced the European Central Bank to increase emergency credit to the Greek banks on a daily basis since last week. Experts say that if Greece does not reach a deal, it could have to put limits on money withdrawals soon.

Miranda Xafa, senior fellow at the Center for International Governance Innovation and a former IMF official, said that the talks were now "more a matter of signing a deal, even a painful deal" that would cover Greece for three to nine months. If no deal is struck quickly, she said, Greece could see "capital controls as early as next week."

Markets edged higher on news of the new proposals by creditors. Europe's Stoxx 50 index was up 0.2 percent, while the Athens Stock Exchange was up 0.6 percent. Greece's sovereign borrowing rates eased, a sign of an easing in tensions among investors.

A Greek banking official says the European Central Bank has approved a request from Athens to increase the amount of emergency liquidity Greek lenders can tap from the country's central bank.

The ECB approved the request Thursday, as it has done every day since Friday as Greece headed into the final stretch of tough bailout negotiations with no clear solution in sight. The banking official, who spoke on condition of anonymity because the decision was not publicly released, said the ECB would meet again within the next 24 hours if necessary.