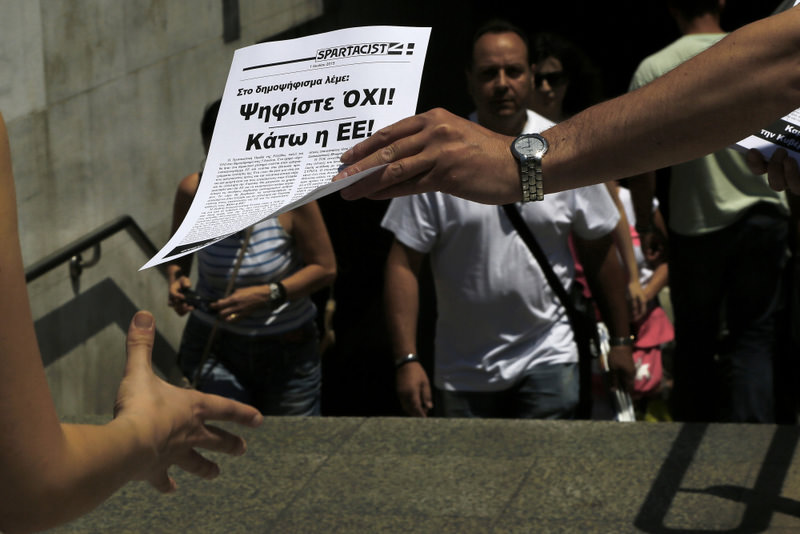 A man passes out a leaflet reading in Greek ,Vote NO in the referendum, Down with the EU, to a passerby outside of the Metro station in Syntagma Square in central Athens on Thursday.
by Associated Press Jul 02, 2015 12:00 am

The battle for Greek votes was in full swing yesterday ahead of a crucial weekend referendum that could decide whether the country falls out of the euro. For Greeks, particularly the elderly, the daily struggle to get cash grinds on in the face of massive uncertainty

Greece's creditors have halted any negotiations on a new financial rescue program until after the popular vote on whether to accept proposed reforms in exchange for bailout loans. Greek Prime Minister Alexis Tsipras has staunchly advocated a "no," saying it would put the country in a stronger negotiating position with creditors. But European officials and the Greek opposition have warned such an outcome could be tantamount to a decision to leave the euro.

Until then, the country remains in limbo, with banks mostly shut and strict cash withdrawal limits imposed until after the vote. Crowds of elderly Greeks, some struggling with walking sticks or being held up by others, thronged the few banks opened to help pensioners without debit or credit cards withdraw at least some money.

The banks shut down on Monday to prevent remaining funds fleeing after Tsipras announced he was calling the referendum. Greeks are now restricted to a daily withdrawals of 60 euros ($67), although in practice this has become 50 euros for many as large numbers of ATMs have run out of 20 euro notes.

Pensioners without bank cards are being allowed to withdraw a maximum 120 euros for the week from open bank branches. "All I know is that that we are all going crazy here," said Anisia Kaklamanou, one of those waiting to get into a bank in central Athens. "And I don't know what to do on Sunday: vote "yes", vote "no". I don't know. All I know is that I have 120 euros to get by until whenever the banks open." The question on Sunday's ballot is whether they accept or reject a reform proposal made by creditors during negotiations last week. But that particular proposal is no longer on the table. It was amended later in the week and has now been rendered moot by the fact that Greece's international bailout expired Tuesday. The same day, the country also became the first developed nation to miss a debt repayment to the International Monetary Fund.

The country is now seeking a different deal with its European creditors. But European officials have said they cannot negotiate with Athens until after Sunday's vote. The head of the eurozone finance ministers' group, Jeroen Dijsselbloem, says it will be "incredibly difficult" to build a new bailout package for Greece if the country votes "no" in Sunday's referendum. He raised questions about the new government's ability to continue talks in such a case and rejected the Greek government's argument that it might get a stronger bargaining position in case of a 'no' vote. "That suggestion is simply wrong," Dijsselbloem told lawmakers in the Netherlands.

Some European officials have said the Greek referendum amounts to a vote on whether to stay in the euro. The Greek government says that is merely an attempt to terrorize the people into voting in favor of destructive austerity policies.

Many Greeks say they will be casting their ballots to end the budget cuts and tax increases imposed in return for bailout loans from other eurozone countries and the IMF. "We've been going through this crisis over the last five years and we had nothing to eat, our pensions and our wages have been slashed and some made a profit off us," said pensioner Koula Makri in a bank queue. She said Tsipras took too long to shut down the banks. "I'm in total agreement with (banks) closing. The queues are nothing next to all the suicides, the soup kitchens and the homeless on the streets of Athens."

French Finance Minister Michel Sapin said Europe remains committed to avoiding "catastrophe" for Greece and keeping it in the eurozone. "The exit of Greece from the eurozone is not desirable, nor envisaged," Sapin said on France's iTele television Thursday. If voters reject international bailout terms in Sunday's vote, then "we are entering in an unknown zone, an economic slide," Sapin warned. Sapin had been pushing for an agreement with Greece before Sunday, but after a fruitless meeting of European finance ministers Wednesday, he conceded there was no point negotiating until after the vote. He said he and other European finance ministers "tried until the last minute to find an accord, until the Greek prime minister said no." European officials say Greece walked out of negotiations last week when the two sides were relatively close to a deal.

Business associations and the country's largest labor union urged the government to cancel the referendum, while two private citizens have appealed to the Council of State, the country's highest court, to rule the vote unconstitutional. The Council of Europe an independent body with 47 member states that monitors elections and human rights told The Associated Press the referendum would fall short of its internationally accepted recommendations, with the time allowed too short and the question put the people not clear.
Last Update: Jul 02, 2015 8:22 pm
RELATED TOPICS