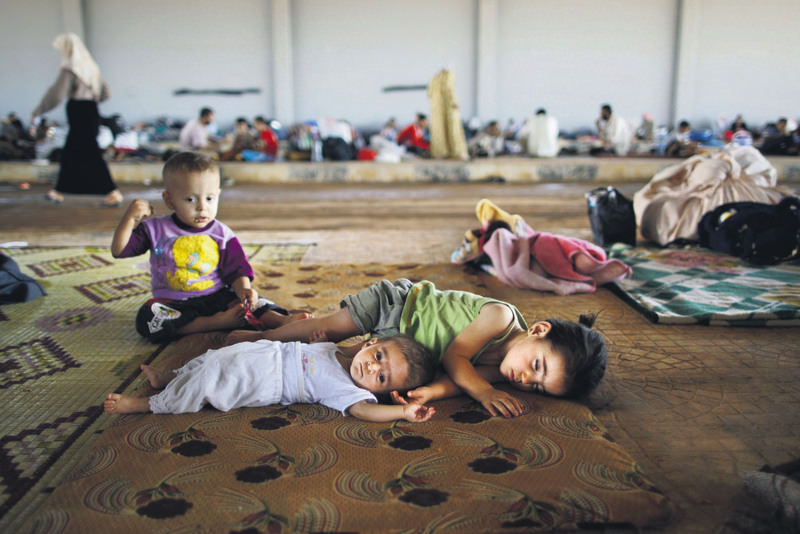 Syrian children who fled from the civil war in Syria lie on the ground while they and others take refuge at the Bab Al-Salameh border crossing near the Syrian town of Azaz in hopes of entering one of the refugee camps in Turkey.
by Hazal Ateş Jul 10, 2015 12:00 am

The Interior Ministry has set rules and quotas for Syrian refugee workers in Turkey. Industry firms will not be allowed to hire more than 10 percent of its workforce from the Syrian refugee population, who will also be allowed to work in coastal areas. Employers who hire refugees illegally will be faced with large fines

A "work package" has been prepared for Syrians who took refuge in Turkey due to the civil war that has been ongoing for over four years. The regulation that has been sent by the Interior Ministry to the Prime Ministry includes a number of topics such as workplace quotas, as well as in which cities and sectors Syrians will work. Accordingly, it will be forbidden to employ Syrians in the provinces that pose problems with regard to security and the labor force.

A two-part study is being conducted on which sectors and under which circumstances the nearly 2 million Syrian refugees in Turkey can work. The regulation, which was prepared by asking the opinions of the Tourism Ministry, Industrial Ministry and other relevant ministries, will be put into practice with a cabinet decree. The legal regulation, which will facilitate work permits and is awaiting parliamentary approval, will be quickly put on the agenda of the parliamentary counsel. The package aims to officially register Syrian refugees and to prevent the victimization of Turkish citizens in the labor market.

Some topics of the package are as follows:

No Syrians will remain unregistered: Uninsured Syrian workers who are employed in the provinces of Gaziantep, Hatay, Kilis, Adana, Mersin, Osmaniye and Istanbul triggers shadow employment. They will be ensured to work on legal grounds in terms of insurance and labor safety and they will be given temporary identities.

Syrian refugees will be forbidden from working on beaches: They will not be given permits to work in tourist provinces such as Antalya and Muğla. An approval will be received from the relevant ministries to create employment in areas such as health, education and engineering.

Industrial cities will have imposed quotas: A quota will be determined in industrial cities such as Kocaeli and Gaziantep in line with requirements. Syrians will not be employed in provinces that pose problems in terms of security and labor force. A 10 percent quota will be put in place for some jobs.

The Labor and Employment Agency will impose a fine of up to TL 10,000 ($3,800) on workplaces that employ Syrians without work permits. The Labor Ministry will audit workplaces. Syrians are not given work permits without obtaining residence permits, which are decided by the council of ministers. Employers are warned against employing Syrians informally.

There are 80,000 vacancies in part-time seasonal jobs in Turkey. Refugees will supply the workforce for vacant jobs by receiving work permits for seasonal jobs in the labor demanding provinces.

Turkey hosts 42 percent of the Syrians who fled from war territory and 14 percent of the Syrians in Turkey are living in refugee camps, which were built by the government. The rest are scattered around Turkey, particularly border provinces and Istanbul. The Syrian population is the highest in Şanlıurfa, followed by Istanbul, Gaziantep, Şırnak, and Hatay. Only 10 percent of the refugees are literate, the ratio of Syrians who have a profession is at about the same level. According to the Ministry of Interior's letter to relevant institutions, all work and study that involves Syrians requires permission from the ministry. In order to be eligible to work in Turkey, foreigners must acquire a six-month residence permit from the Ministry of Interior directorate of the province. Then a work permit should be acquired from the General Directorate of Labor via the "e-devlet" online service. There have been a lot of applications for work permits and there is an upcoming regulation for shortening the work permit process.

The regulations that are being made for Syrian employment also ease the process of employing qualified foreign labor. Many process-delaying requirements are to be removed, however an applicant will be required to have resided in Turkey for 18 months.
Last Update: Jul 10, 2015 7:40 pm
RELATED TOPICS