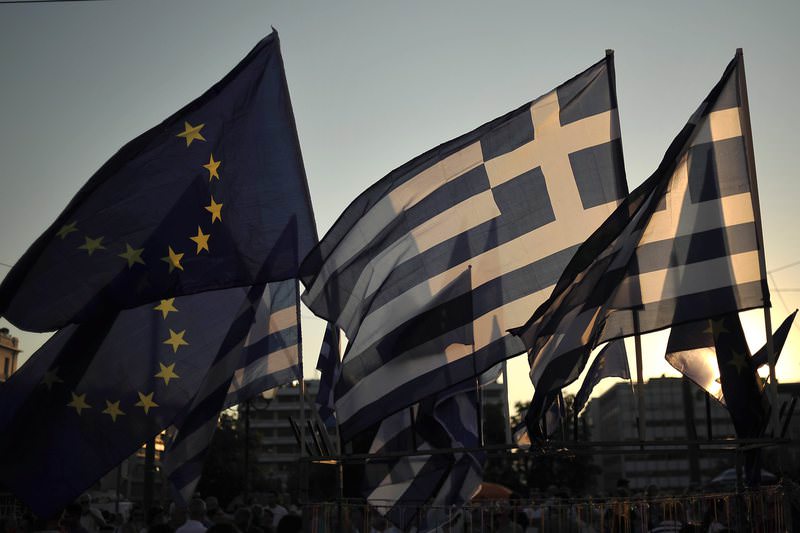 |EPA Photo
by Compiled from Wire Services Jul 11, 2015 12:00 am
German Finance Minister Wolfgang Schaeuble has proposed that Greece either improve its bailout-associated reform plan or be left to exit the eurozone for at least five years, a German newspaper reported Saturday.

The Frankfurter Allgemeine Zeitung based its report on a leaked position paper that it said Schaeuble communicated to other eurozone countries on Saturday.

The German Finance Ministry declined to comment on the report.

However, a Greek government official has said that German Finance Minister Wolfgang Schaeuble has not raised the possibility of Greece exiting the eurozone at crisis talks in Brussels, Reuters reported.

The one-page position paper says that reform proposals made by Athens in its bid for a new bailout lack "vitally important reform areas to modernize the country and to boost economic growth and sustainable development in the long term," the newspaper wrote.

That is why the proposals cannot be the basis for a new three-year loan requested by Greece, the paper reportedly concludes.

The German Finance Ministry sees two other paths remaining. One would be for Greece to quickly and comprehensively improve its proposals, with full support of the Greek parliament.

The ministry suggested that Greece should for instance transfer 50 billion euros (56 billion dollars) in assets to a trust fund that would then sell them and thereby decrease the country's debt, the Frankfurter Allgemeine Zeitung wrote.

The second option in the paper would be negotiations with Athens about a "time-out."

This alternative foresees Greece leaving the eurozone for at least five years and restructuring its debt. It would remain a member of the European Union and continue to receive "growth-enhancing, humanitarian and technical support," the newspaper wrote.

A European official at the Greek bailout talks said the creditors want "more specific and binding commitments" from the Greek government that it will stick to its reform promises.

The official, who spoke on condition of anonymity because he's not authorized to talk publicly, says there's a general feeling in the room that the Greek proposals are "too little, too late" and as such, more proof of the government's commitment to follow through is required.

The official said these commitments don't "necessarily have to be austerity measures."

Meanwhile in Greece, Economy Minister George Stathakis said on Saturday dissenting lawmakers from left-wing Syriza, including ministers, should step aside if they disagree with government policies over bailout reforms.

In a parliamentary debate which ended early Saturday, ten lawmakers from Syriza either abstained or rejected a roadmap of reforms the Greek government was negotiating with international creditors.

"If a lawmaker of a leftist party disagrees with the policies of the government...they should follow the rules and if they strongly disagree resign their seat," Economy Minister George Stathakis told Greece's Mega TV.

Energy Minister Panagiotis Lafazanis was one of the Syriza ministers who did not vote for the measures which were passed with backing of pro-EU opposition parties.

"If it were me I would resign," Stathakis said.