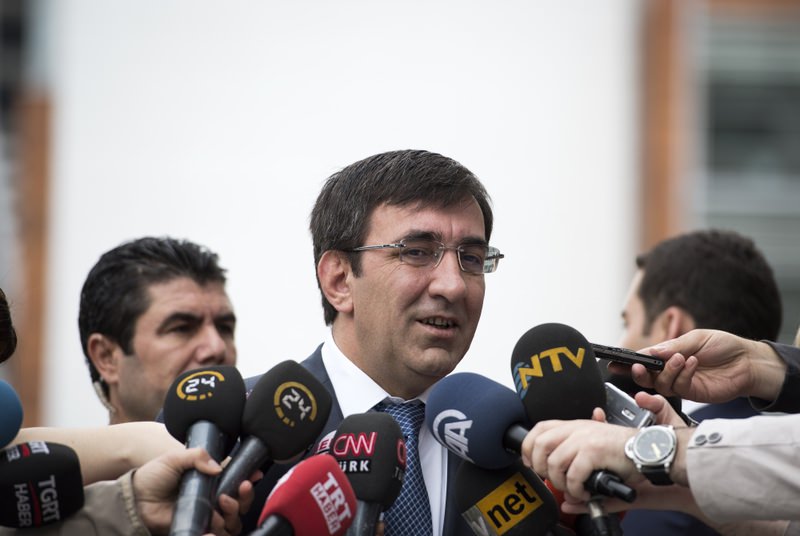 Prime Minister Davutoğlu will hold talks to form a coalition government this week. The development minister said the AK Party will focus on economy-related ministries to sustain economic stability

The Justice and Development Party (AK Party) does not have red lines and the priority is to take ministries related to the economy, according to Development Minister Cevdet Yılmaz. Negotiations for a coalition government start this week, as President Recep Tayyip Erdoğan authorized prime minister and AK Party leader Ahmet Davutoğlu to form a government after the June 7 elections made it impossible for the 13 years of a single-party government to continue.

The AK Party will focus on ministries related to the economy to sustain economic stability. Yılmaz said they have prepared very well for the process and established different commissions to hold talks with the Republican People's Party (CHP) and the Nationalist Movement Party (MHP). He also said a separate commission was established for the economy and made detailed comparisons of those commissions. This commission has been working on the campaign promises of the opposition parties to examine possible effects on the economy and determine the AK Party's position.

Stressing that during the first tours of the coalition negotiations, issues will not be discussed in detail, Yılmaz said: "There will be warm-up sessions until Ramadan eid [which begins this Friday]. The main outlook and general principles will be discussed. This is like establishing a company." Citing examples from the war in Syria and the financial crisis in Greece, Yılmaz said figures in the market, the growth of the country and inflation figures indicated how they had taken the right steps so far. "We are calm despite the fire surrounding us. Stability is a product of 13 years of hard work. Therefore, we do not want this to be wasted. Taking economy-related ministries in a possible coalition is our priority," Yılmaz said. He emphasized that other political parties offered to establish different ministries. The CHP is suggesting establishing an Entrepreneurship Ministry and dividing the Culture and Tourism Ministry, said Yılmaz, adding that they were open to negotiations.

When Yılmaz was reminded of the red lines of the opposition party, he said that the AK Party did not have red lines but had principles and policies. "If you narrow down the space with red lines during negotiations, it won't be good for the country. We are not willing to do everything, but we don't adopt the concept of red lines either. There are differences between parties, but there are similarities too. It is necessary to start from the similarities in these kinds of negotiation. If everyone just stands where they are, it doesn't work. Everyone has to take a step. Citizens will notice what is going on. Citizens will take note of those who don't put in sincere effort," Yılmaz stressed.

Yılmaz was asked about the words of MHP leader Devlet Bahçeli concerning sacrifice. Everyone who loves their country should make a sacrifice, Yılmaz said, adding: "Establishing a government together doesn't mean that we hold the same views on every matter. Then, everyone would be in the same party. We must form a joint agenda despite our differences."

The numbers also point to stability in the Turkish economy, which should be kept by the next government. Turkey's exports had increased from $36 billion to $171 billion, an increase of $135 billion during the AK Party's rule. Income per capita reached $10,400 in 2014 from $3,300 in 2002 when the AK Party first came into power. Inflation has decreased to around 7 percent from 32 percent in the same time period. Turkey's debt/gross domestic product (GDP) ratio has declined from 74 percent to 36 percent, while the Maastricht criteria, the five criteria laid out by the European Union for admission into the common currency, requires 60 percent.
Last Update: Jul 12, 2015 7:54 pm
RELATED TOPICS