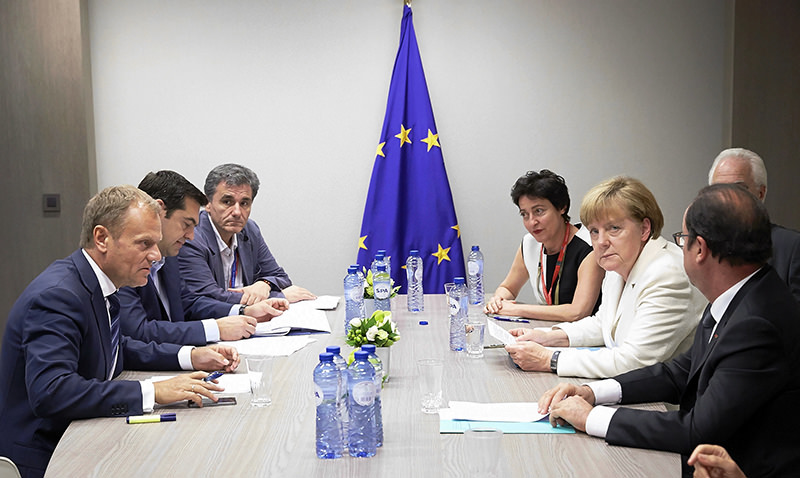 | AA Photo
by Compiled from Wire Services Jul 13, 2015 12:00 am
At the end of a debate which lasted into early Monday morning, eurozone leaders managed to achieve a compromise proposal for a new Greek bailout.

German Chancellor Angela Merkel said the eurozone is open to the idea of giving Greece some debt relief but she has ruled out an outright cut in the country's debt level.

Speaking after an agreement to start bailout negotiations with Greece, Merkel said the eurozone "is prepared, if it becomes necessary, to take additional measures" to ease Greece's debt burden.

She noted that the eurozone could give Greece "a longer grace period." A direct cut though is not an option, she added.

Merkel insisted that no relief will come until after "the first successful assessment of the new Greek program."

Merkel said she recommended the start of negotiations with the cash-strapped country with "full conviction" but stressed that trust with Greece "needs to be rebuilt."

"EuroSummit has unanimously reached agreement. All ready to go for ESM programme for Greece with serious reforms and financial support," he wrote, referring to the eurozone's bailout fund, the European Stability Mechanism.

At issue is the third bailout for Greece, with the eurogroup estimating financing at €85 billion ($95 billion), considerably more than the Greek government demand of €55.3 billion over three years.

European Commission President Jean-Claude Juncker said there was no longer any risk of Greece crashing out of the euro after Athens agreed a bailout deal with eurozone partners.

"Grexit has gone," Juncker said when asked by AFP if Greece's position in the single currency was still in danger.

Greek Minister of Economy Giorgos Stathakis said that the capital controls on banks, limiting the cash receipts from ATMs, will remain active for at least two more monts. It was reported that Greek banks are likely to remain closed this week as the country is still short of cash.

A draft statement from eurozone finance ministers on Sunday stressed the "crucial need to rebuild trust" with the Greek government as a prerequisite for a new loan, a point emphasized by Finnish Finance Minister Alexander Stubbs after the meeting.

It also broaches the idea that, in the case of no agreement, negotiations should begin on Greece's temporary exit from the common currency zone a 'time out' that might also require a new debt repayment schedule.

The draft statement also calls on the Greek parliament to approve tax and pension reform measures to reduce Greece's budget deficit, and it suggests Athens privatizes $56 billion of its assets and use the proceeds to reduce its debt of nearly €350 billion.

"I think it's a document that has far-reaching conditionality on three accounts," Stubbs told reporters. "The Greek parliament must pass laws that have to be pushed through by July 15; tough conditions on labor reforms, pensions, value-added tax and taxes, and tough measures on privatization and privatization funds."

"The bottom line is that if there is to be an opening of European Stability Mechanism (ESM) negotiations, all of these conditions have to be met and approved by the Greek government," he insisted.

To restart an ESM bailout, member state parliaments must ratify the proposal. Members of the Finnish parliament have already stated that they would not accept the deal, and the German parliament is deeply divided on the subject.

It is not clear whether the 'timeout' proposal, by the German finance ministry, in which Greece would leave the euro system for five years, is under consideration as well. Nor is it clear how such a move could be structured, as it would mean that Greece would have to adopt an alternative currency during the period.

There may be resistance on the Greek side. The sticking points are reportedly the future involvement of the International Monetary Fund (IMF) in Greece's bailout program, and a proposal that Greece set aside 50 billion euro worth of state-owned assets in a fund for eventual privatization.

Independent Greeks leader and Defense Minister Panos Kammenos posted a tweet on Sunday: "The Greek people's limit is the decision of the political leaders under the President of Republic [sic]. It was proved that they [EU] want our devastation. That's enough."