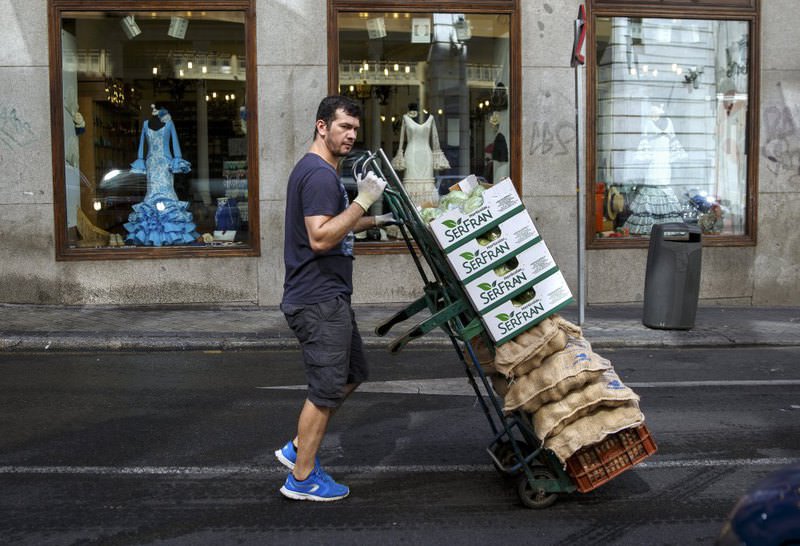 by Jul 27, 2015 12:00 am
Many of Spain's 5 million unemployed dream of finding a steady job in the economic recovery vaunted by the government, but a legion of undeclared workers still scrape by cash-in-hand. "Nowadays the phrase 'steady job' means nothing in Spain," Paloma Sotillo, 43, said. She is one of 1.7 million people in Spain who admit to earning at least part of their pay in the "black economy," without tax or social security contributions. Spain's economy returned to growth in 2013 after five years of economic crisis, but its unemployment rate is still the second-highest in the eurozone after Greece.

The rate dipped to 22.37 percent in the second quarter of this year, according to official data published this week.

A study by Catalan business school Esade indicated, however, that one in 10 employees and one in five unemployed people in Spain did work for earnings that they did not declare to the taxman.

Sotillo said she had been unemployed for a year when she found a job in a Madrid toyshop in December 2013. She worked there for a year before stopping in order to look after her sick mother. "I had a contract to work 30 hours a week, but I worked 35 and they paid me the difference cash-in-hand," she said, a salary of 700 euros ($768) plus an undeclared supplement of 120 euros.

The tax collectors' union Gestha has said the vast black economy has for decades undermined Spain, the eurozone's fourth-biggest economy. It estimates the black economy equals about a quarter of Spain's gross domestic product - or roughly a quarter of a trillion euros.

For Gestha, that makes Spain one of the fiscal bad boys of Europe, along with Greece, Italy, Portugal and Poland.

Economists say the cash-in-hand habit is strongest in agriculture, building, domestic work, trade and tourism. "The high level of unemployment has increased it," Gestha's President Carlos Cruzado said. He said Spain suffers from a culture of tax avoidance fuelled by indignation over constant reports of political corruption, and also lacks enough tax inspectors. During the boom decade before Spain's crisis broke out, companies subcontracted a lot of their work to workers whom they paid in cash in order to keep up with demand, Princeton University sociologist Alejandro Portes said.

Then in the crisis, this gave way to "an informal economy of survival" of technically unemployed people living hand-to-mouth from casual jobs, he said.

Cruzado explained that the black economy persists partly due to a belief that stopping people earning that way in a crisis could have explosive consequences. It is hard to do away with a system that supports many people who have exhausted all their welfare subsidies in the crisis. "There is a theory in Spain that, with 5 million people unemployed, there would be a revolt on the street if it were not for the underground economy," Cruzado said. Prime Minister Mariano Rajoy said Spain created 400,000 jobs last year and will add a further 600,000 in 2015. The unemployment rate declined 1.4 percent in the second quarter, according to the National Statistics Institute. But experts, including specialists from the Organization for Economic Co-operation and Development (OECD) grouping of developed countries, warn that in Spain, as in countries such as Greece and Italy, many workers are longing for full-time work.

Angel Valls of Esade estimated that 83 percent of contracts signed in the second quarter in Spain were temporary ones, but warns that Spaniards demand more from their developed economy. "The quality of our jobs is very bad," he said. "Part-time work is becoming more common, but most people working part-time in Spain don't want to work as a cook in a cafe."
Last Update: Jul 27, 2015 1:58 am
RELATED TOPICS