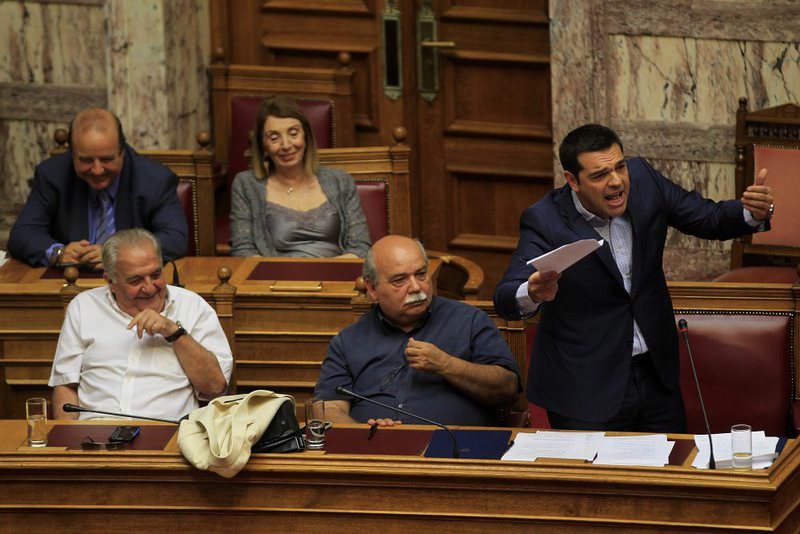 Greek Prime Minister Tsipras (R) speaks next to other ministers in Parliament during Prime Minister's Question Time in Athens on Friday.
by Associated Press Aug 01, 2015 12:00 am

While negotiations on the third bailout continue, Greek Prime Minister Tsipras admits that he disagrees with the reforms and ordered a eurozone exit plan to be prepared to be ready for an emergency

Greece's talks with its international creditors on a third bailout worth 85 billion euros ($93 billion) shifted into a higher gear on Friday, with lead negotiators from the European Union and International Monetary Fund meeting key ministers in Athens.

The talks with Finance Minister Euclid Tsakalotos and Economy Minister Giorgos Stathakis follow preparatory meetings in the Greek capital this week between lower-level officials on reforming the tax system and labor market regulations.

The third bailout will include a new punishing round of austerity measures heaped on a country reeling from a six-year recession and more than 25 percent unemployment. Prime Minister Alexis Tsipras has pledged to back the new cutbacks, while openly admitting that he disagrees with them. "We will implement them, yes, because we are forced to," he said in parliament Friday. "But at the same time we will struggle to change them, to improve them and to counter their negative consequences."

The bailout talks with the IMF, European Commission, European Central Bank and European Stability Mechanism must be concluded before Aug. 20. That's when a debt repayment to the ECB worth more than 3 billion euros is due money which Greece does not have. Tsakalotos said the talks are focused on how to recapitalize Greece's battered banking system, whose deposit base was badly hit in recent months as Greeks fearing a euro exit emptied their accounts. The talks also addressed Greece's privatization commitments and budget surplus targets. "As you can understand, there was convergence on some points, and less convergence on others," he said.

Friday's meetings came hours after Tsipras defeated a bid by dissenters in his left-wing Syriza party to push for an end to bailout negotiations and seek a return to the old national currency, the drachma.

The party's governing central committee backed a proposal by Tsipras to hold an emergency party conference in September, after the talks have been concluded. Dissenters had sought a conference earlier, pressing the government to abandon the negotiations.

Tsipras effectively lost his majority in parliament in a vote three weeks ago, when nearly one-fourth of Syriza's lawmakers refused to back new austerity measures, arguing that the party has betrayed the anti-austerity platform that got it elected in January. "This country no long has democracy, but a peculiar type of totalitarianism a dictatorship of the euro," prominent dissenter Panagiotis Lafazanis said.

Pro-European Union opposition parties were left to save the bill and have continued to prop up his government, while Tsipras has taken no disciplinary action against dissenters. "We have to agree that we can't go on this way," Tsipras told the committee members during a 12-hour meeting. He added that "the absurdity of this strange and unprecedented dualism" within the party must stop.

Later Friday, Tsipras defended his flamboyant former finance minister, Yanis Varoufakis, who came under heavy fire over claims he made and confirmed after they were leaked that he had drafted contingency plans for a parallel payment system that could have eased a euro exit.

"Of course I issued personal instructions to the finance minister to create a team that would work on a plan of defense in the event of a national emergency," Tsipras told parliament, answering a question from the opposition. "It would have been politically naive and irresponsible not to do so. Does that mean ... that I was seeking an emergency?" he said, angrily rejecting accusations that he had intended to take the country out of the 19-country eurozone.

Tsipras did not directly address Varoufakis' more controversial claim that he had been planning to hack into his own ministry's tax records to bypass officials allegedly under the control of Greece's creditors. Varoufakis had alleged that the aim would have been to create a parallel banking system to deal with a potential closure of the country's banks. But Tsipras defended the former minister's integrity.

"Mr Varoufakis may have made mistakes," he said. "You can accuse him as much as you want for his political plans, for the comments he made, for not wearing tasteful shirts, for going on holiday to (the island of ) Aegina," during a key parliamentary vote. "But you can't accuse him of dishonesty."
Last Update: Aug 01, 2015 1:43 am
RELATED TOPICS